Moments ago, the Treasury sold $14 billion Treasuries in a 19-year 11-month reopening of the infamous “kink” tenor in the pancaked US yield curve. “Kink”, because as shown below, the yield on the 20Y remains the highest one across the entire curve..

… and today’s auction only added fuel to the fire.

The internals were also nothing to write home about with Indirects taking down 67.4%, right on top of the recent average of 67.5%, and slightly below last month’s 70.6%. And with Directs taking down 20.2%, the most since March, meant that Dealers were left with just 12.4%, one of the lowest on record.

Overall, a disappointing auction – which however was not too dramatic and the weakness can be explained by the sharp drop in yields across the curve and lack of concession –  especially once the Fed pivots and turns dovish in the coming months which will send yields on the 20Y crashing lower.. 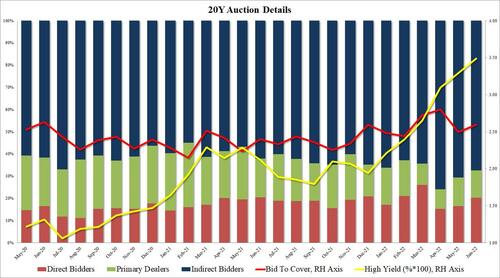