The United Kingdom has issued a public intelligence update on the Russian invasion of Ukraine on Thursday, which marks 78 days into the conflict, at a moment Kremlin forces have been pushed back from Kharkiv amid an ongoing Ukraine counteroffensive.

The Ministry of Defense in its report assessed that a temporary Russian withdrawal of troops from regions previously captured due a Ukrainian counteroffensive proves Russia’s “inability to capture key Ukrainian cities.”

The intelligence update reads that “Ukrainian forces are continuing to counterattack to the north of Kharkiv, recapturing several towns and villages towards the Russian border.”

Despite Mariupol in the southeast – in heavily contested Donetsk Oblast being effectively under Russian control – another major city, Kharkiv, which is the country’s second largest with about 1.5 million people, has not fallen to the Russians despite early in the invasion being encircled.

“Despite Russia’s success in encircling Kharkiv in the initial stages of the conflict, it has reportedly withdrawn units from the region to reorganize and replenish its forces following heavy losses,” the Ministry statement continues.

“The withdrawal of Russian forces from the Kharkiv Oblast is a tacit recognition of Russia’s inability to capture key Ukrainian cities where they expected limited resistance from the population,” it added.

The Russian offensive has appeared stalled near Kharkiv… 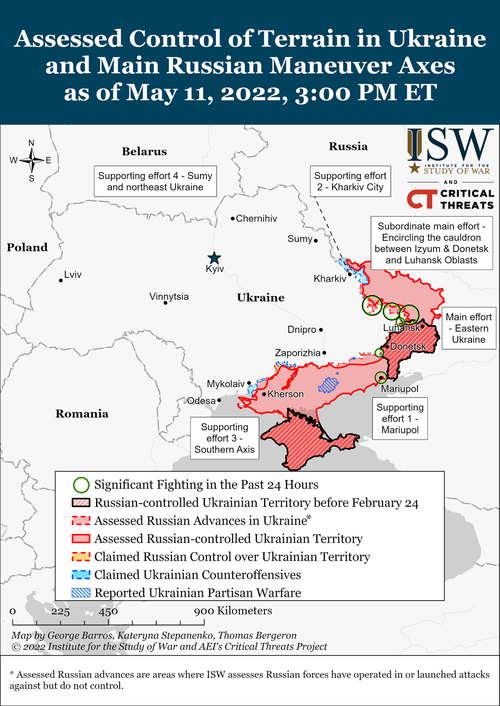 A BBC team this week said it has confirmed the Russians have been pushed back from a key village, moving the front line of contact significantly back, after traveling to the recent battle zone:

The village of Ruska Lozova stands at the center of the turn in Ukraine’s response to Russian aggression.

It was recently liberated in a co-ordinated effort led by senior military commanders. Ukrainian troops from territorial defence, the national guard and the regular army are seeking to push the Russians back along a 32-km (20-mile) front line. In the Russian city of Belgorod, just across the border, troops have amassed for a likely counter-offensive.

#Ukraine: The Territorial Defense Forces of #Kharkiv operating a technical with an AZP S-60 57mm anti-aircraft gun mounted – this model entered service back in 1950, but in the current situation it is better than nothing for volunteer formations. Also notice a M1910/30 Maxim MG. pic.twitter.com/fMGOWs19wC

Speculating on the strategic purpose of the withdrawn forces, the UK defense ministry statement said that Russian troops “will likely deploy to the eastern bank of the Siverskyi Donets River, forming a blocking force to protect the western flank of Russia’s main force concentration and main supply routes for operations in the vicinity of Izyum.”