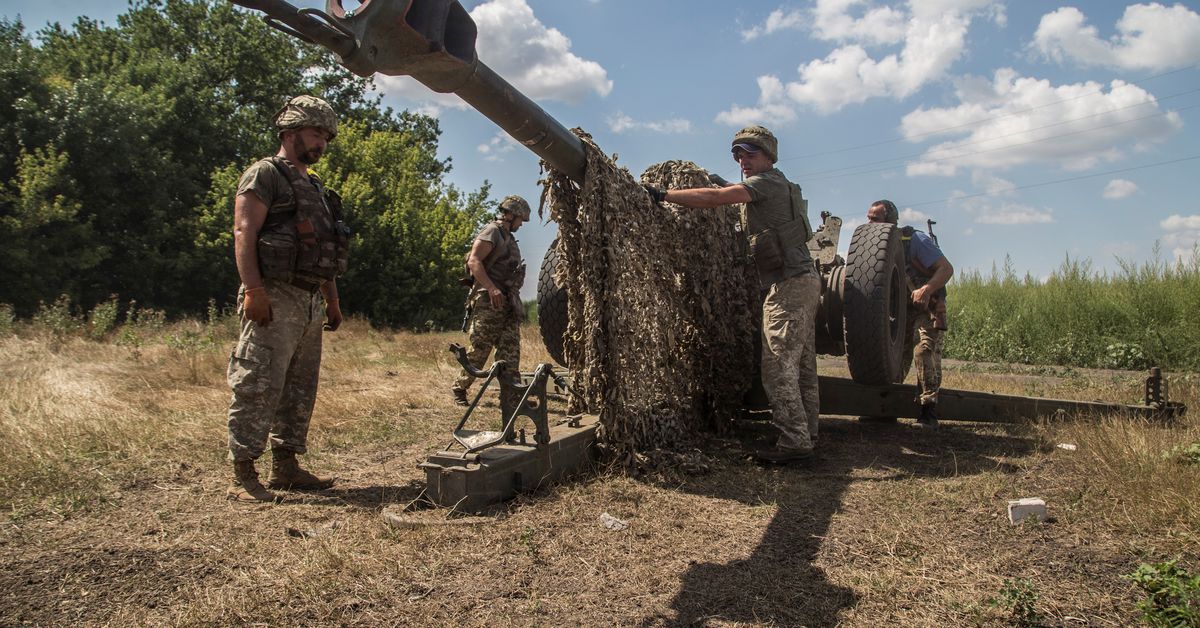 KYIV, Aug 14 (Reuters) – Ukraine is targeting Russian soldiers who shoot at Europe’s largest nuclear power station or use it as a base to shoot from, as G7 nations, fearing a nuclear catastrophe, called on Moscow to withdraw its forces from the plant.

Ukraine and Russia have traded accusations over multiple incidents of shelling at the Zaporizhzhia facility in southern Ukraine. Russian troops captured the station early in the war.

“Every Russian soldier who either shoots at the plant, or shoots using the plant as cover, must understand that he becomes a special target for our intelligence agents, for our special services, for our army,” President Volodymyr Zelenskiy said in an evening address on Saturday.

Zelenskiy, who did not give any details, repeated claims that Russia was using the plant as nuclear blackmail.

The plant dominates the south bank of a vast reservoir on the Dnipro river. Ukrainian forces controlling the towns and cities on the opposite bank have come under intense bombardment from the Russian-held side. read more

Ukrainian presidential adviser Mykhailo Podolyak accused Russia of “hitting the part of the nuclear power plant where the energy that powers the south of Ukraine is generated”.

“The goal is to disconnect us from the (plant) and blame the Ukrainian army for this,” Podolyak wrote on Twitter.

The International Atomic Energy Agency, which is seeking to inspect the plant, has warned of a nuclear disaster unless fighting stops. Nuclear experts fear fighting might damage the plant’s spent fuel pools or the reactors.

United Nations chief Antonio Guterres has called for the establishment of a demilitarised zone around the Zaporizhzhia facility, which is still being run by Ukrainian technicians.

Kyiv has said for weeks it is planning a counteroffensive to recapture Zaporizhzhia and neighbouring Kherson provinces, the largest part of the territory Russia seized after its Feb. 24 invasion and still in Russian hands.

Russian and Ukrainian forces earlier fought for control of Chornobyl, the still-radioactive site of the world’s worst nuclear accident, also raising fears of a disaster.

Russia’s priority over the past week has likely been to reorient units to strengthen its campaign in southern Ukraine, British military intelligence said on Sunday.

Russian-backed forces of the self-proclaimed Donetsk People’s Republic in the eastern region of Donbas continued assaults to the north of Donetsk city, the British Defence Ministry said in its daily intelligence bulletin on Twitter.

Particularly heavy fighting has focussed on the village of Pisky, near the Donetsk airport, it said. Ukraine’s military command said on Saturday “fierce fighting” continued in Pisky, an eastern village over which Russia had earlier claimed full control. read more

The British military said the Russian assault likely aims to secure the M04 highway, the main approach to Donetsk from the west.

Ukraine’s infrastructure ministry said on Saturday that 16 ships carrying 450,000 tonnes of agricultural products had departed from Ukrainian sea ports since early August under the deal, which ensured safe passage for vessels.

The U.N.-chartered ship MV Brave Commander will depart Ukraine for Africa in coming days after it finishes loading more than 23,000 tons of wheat in the port of Pivdennyi, a U.N. official said. read more

The ship, bound for Ethiopia, will be the first humanitarian food aid cargo to Africa since the start of the war, amid fears the loss of Ukrainian grain supplies could lead to outbreaks of famine.

Zelenskiy said that in less than two weeks, Ukraine had managed to export the same amount of grain from three ports as it had done by road for all of July.

Ukraine hopes to increase its maritime exports to over 3 million tonnes of grain and other farm products per month in the near future.

Ukraine and Russia are major grains exporters. The blockage of Ukrainian ports has trapped tens of millions of grain in the country, raising fears of severe food shortages and even outbreaks of famine in parts of the world. read more

Russia’s invasion, which it calls a “special military operation” to demilitarise and “denazify” its smaller neighbour, has pushed Moscow-Washington relations to a low point, with Russia warning it may sever ties.

The United States has led Ukraine’s Western allies in supplying it with weapons to defend itself and punitive sanctions against Moscow.

A senior Russian official on Friday said Moscow had told Washington that if the U.S. Senate passed a law singling out Russia as a “state sponsor of terrorism”, diplomatic ties would be badly damaged and could even be broken off.

On Saturday a senior Russian foreign ministry official warned that any seizure of Russian assets by the United States would completely destroy bilateral relations, TASS reported.

Alexander Darchiev, head of the ministry’s North American Department, was quoted as saying U.S. influence on Ukraine had increased to the degree that “Americans are increasingly becoming more and more a direct party in the conflict”.

The United States and Europe, wary of being dragged directly into the war, have refused Ukraine’s request to establish a no-fly zone to help it protect its skies from Russian missiles and warplanes.

2 hours ago
Kanye West and Tucker Carlson interview: When is it on and how can I watch?

2 hours ago
Kanye West and Tucker Carlson interview: When is it on and how can I watch?