The latest war machine headed to Ukraine’s front lines isn’t a flying drone but a miniature 4×4 ground-based robot — equipped with a machine gun.

According to Forbes, Ukrainian forces are set to receive an uncrewed ground vehicle (UGV) called “GNOM” that is no bigger than a standard microwave and weighs around 110lbs. 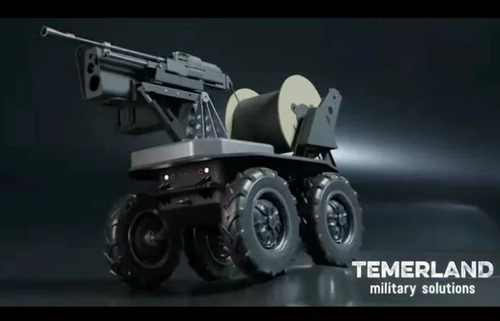 GNOM isn’t radio-controlled and has a 2,000 meter (1.25 mile) spool of fiber-optic cable mounted on the rear that offers operators a jam-proof way to control it on the modern battlefield without being detected or signal jammed by Russian electronic warfare equipment.

“Control of GNOM is possible in the most aggressive environment during the operation of the enemy’s electronic warfare equipment.

“The operator doesn’t deploy a control station with an antenna, and does not unmask his position. The cable is not visible, and it also does not create thermal radiation that could be seen by a thermal imager,” said Eduard Trotsenko, CEO and owner of Temerland, the maker of the GNOM.

“While it is usually operated by remote control, GNOM clearly has some onboard intelligence and is capable of autonomous navigation. Previous Temerland designs have included advanced neural network and machine learning hardware and software providing a high degree of autonomy, so the company seems to have experience,” Forbes said.

The 7.62mm machinegun mounted on top of the “Terminator-style” robot will provide fire support for Ukrainian forces in dangerous areas. The UGV can also transport ammunition or other supplies to the front lines and even evacuate wounded soldiers with a special trailer.

Temerland said the GNOMs would be deployed near term. The highly sophisticated UGV could help the Ukrainians become more stealthy and lethal on the modern battlefield as they have also been utilizing Western drones.

Killer robots with machine guns appear to be entering the battlefield, and this one seems as if it was “WALL-E” that went to war.