When and how will central banks escape their addiction to QE? That question was addressed in a report by the UK House of Lords. 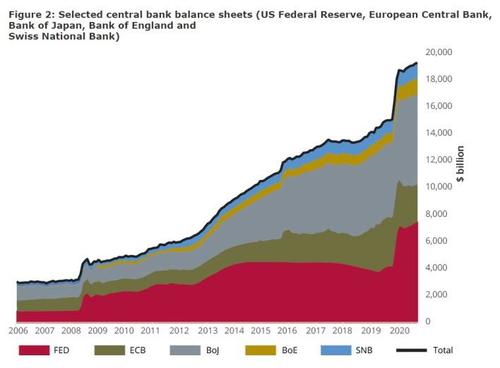 The House of Lords is Investigating a Dangerous Addiction to QE

The report is through the eyes of the UK regarding the Bank of England but the comments and concerns apply to every central bank. Here are some snips.

Lords: In the UK, quantitative easing was envisaged, at the point of introduction in 2009, as a short-term measure to support the economy through the global financial crisis. However, over the last decade or so, the programme has expanded substantially, and it has become the Bank of England’s main monetary policy tool.

Mish: It was supposedly going to be short-term everywhere. It wasn’t. 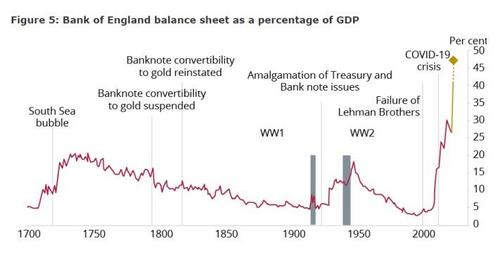 Lords: We launched this inquiry at this juncture for several reasons. First, the quantitative easing programme has not been subject to sufficient scrutiny, including in Parliament, given its size, longevity and economic importance. The increased role of the Bank of England in the economy merits enhanced accountability by Parliament. Second, the substantial escalation of quantitative easing during the COVID-19 pandemic was unprecedented. Third, we wished to examine the extent to which quantitative easing has achieved its stated objectives, along with its effects on the real economy, growth and inflation.

Lords: Professor Tim Congdon, Founder and Chairman of the Institute of International Monetary Research, told us that the use of quantitative easing in 2009 prevented a deflationary spiral from taking place. He said that without quantitative easing, “the quantity of money would have fallen very rapidly”. Adam Posen, President of the Peterson Institute for International Economics, said that quantitative easing “tends to work most powerfully when a financial panic is under way”, but its ability to stimulate spending and investment in stable economic conditions is like “pushing on a string.”

Mish: Pushing on a string is a Keynesian analogy. Yet, it is very clear that QE did not stimulate bank lending in the US, EU, or Japan.

Lords: Professor Philip Davis, Professor of Banking and Finance at Brunel University and a Fellow at the National Institute of Economic and Social Research (NIESR), said there is “some evidence” of pension funds engaging in a “search for yield” through investment in leveraged alternative assets, structured products, private equity and derivatives. Nigel Wilson, Chief Executive Officer at Legal & General, said that quantitative easing is not the right policy tool for stimulating sustainable economic growth. He said that quantitative easing had boosted asset prices and stabilised financial markets successfully, but that it cannot be expected to create sustainable economic growth, for which an active fiscal policy was needed instead.

Lords: Lord Macpherson of Earl’s Court, former Permanent Secretary at HM Treasury, told us that the effectiveness of quantitative easing had diminished over time. When it was first deployed in 2009—after interest rates were cut from 4.5% in October 2008 to 0.5% in March 2009—it “had a real impact”. However, he argued that when long-term interest rates are close to the zero lower bound the Bank of England must “buy a great deal of debt to have any impact at all.”

Mish: It is now extremely counterproductive. The Fed crams money down banks’ throats and they don’t want it and cannot use it. The result has been a massive surge in reverse repos.

Mish: Don’t ever expect policy makers, academia, or politicians to admit they were wrong.

Lords: Other witnesses told us that the more persistent than expected use of quantitative easing over the last decade had led to excessive and potentially destabilising risk-taking in markets. Dr Mohamed El-Erian, President of Queens’ College Cambridge and Chief Economic Adviser at Allianz, told us that markets are in a bubble in which “financial assets are totally decoupled from [economic] fundamentals.”

Mish: Totally agree. The Bank of England of course disagrees, so does the Fed, BOJ, etc.

Lords: Quantitative easing hastens the resulting increase in the cost of servicing the Government’s debt if interest rates were to rise across the curve. On 6 July 2021, the Office for Budget Responsibility said that since 2008, the proportion of Government debt on which interest rates respond within the first year “has more than doubled”, which “has made the first-year fiscal impact of a one percentage point rise in interest rates six times greater than it was just before the financial crisis, and almost twice what it was before the pandemic, just 18 months ago.” Unwinding quantitative easing is a process sometimes referred to as quantitative tightening, which is a contractionary policy applied to decrease the amount of money and liquidity in the economy. This process will involve central banks reducing the size of their balance sheets. They can do this by allowing their bond holdings to mature rather than replacing them, tapering or slowing the amount of asset purchases made, or selling gilts back to the market. In 2013, the Federal Reserve announced it would begin to reduce or ‘taper’ the pace of its asset purchases. In reaction to the announcement, which was not expected by the financial markets, bond yields and financial market volatility rose significantly. This response by the financial markets was known as a ‘taper tantrum’ in the financial media.

Mish: Central banks discuss tapering but never succeeded. Are they now trapped in a “no-exit paradigm”?

Mish: The inflationary aspect has largely been in the price of assets. However, there is a knock on impact in which people feeling wealthy buy cars extra homes take excess vacations etc, boosting consumer prices as well.

The concerns of the House of Lords are well stated and should be heeded but they won’t be anywhere.

Despite the clear market response that QE serves no purpose, and is in fact counterproductive, central banks remain committed to it.

For a discussion of the negative impacts of QE that some might equate to “pushing on a string”, please see Down the Rabbit Hole in Reverse Repos, What is the Fed Doing?

Also note that Economic Nonsense is Extremely Well Anchored in Fantasyland, and Not Just at the Fed