After a small bounce in December – from decade lows – University of Michigan Sentiment was expected to slip back lower in preliminary January survey data, and it did… more than expected. Both current conditions and expectations fell in the flash January data, dragging the headline print down from 70.6 to 68.8 (below the 70.0 expectations)… 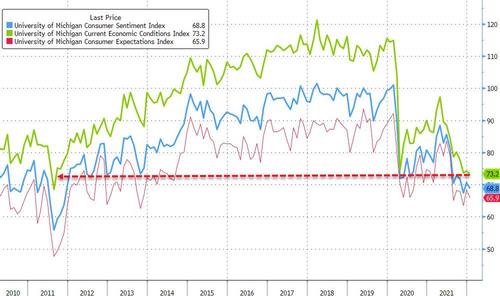 Current Conditions are the worst since September 2011. Current conditions in the national economy were reported to have worsened by half of all households in each of the past three months, and just one-third of all households have anticipated improved economic conditions during the year ahead.

When asked to evaluate the year-ahead outlook for the economy, 61% reported that they expected bad times ahead.

Sentiment among Democrats continued to slide, back to the lowest since Dec 2020 (as Republican confidence rebounds)…. 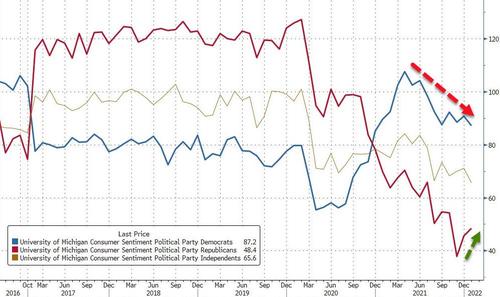 Interestingly, buying conditions for houses rebounded in early January but for vehicles it crashed to a record low… 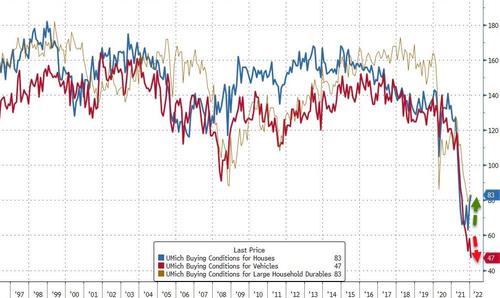 Finally, and perhaps most notably, inflation expectations rose significantly in January, with medium-term expectations rising to 3.1% – the highest since January 2011… 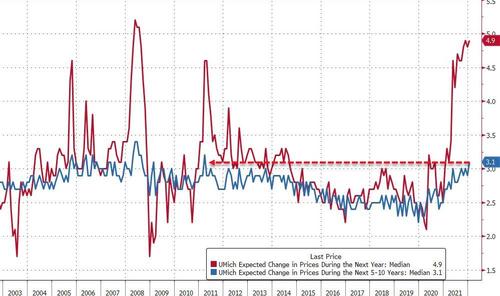 So, will The Fed’s jawboning bring down inflation expectations?

As UMich noted, while the Delta and Omicron variants certainly contributed to this downward shift, the decline was also due to an escalating inflation rate.