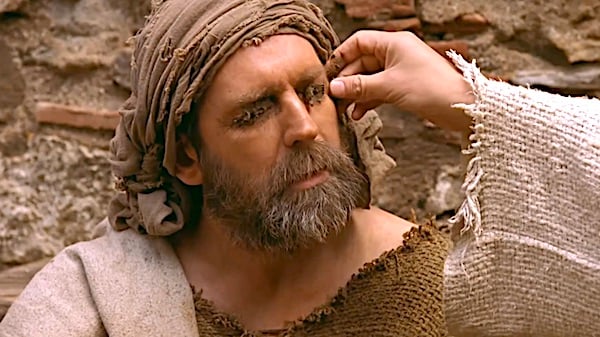 One of the most inspiring miracles recorded in Scripture is the famous healing of a man who had been blind from birth.

What’s especially interesting is the recipe Jesus used to give the man his sight. It involves putting mud on his face, specifically, his eyes.

It has been retold countless times, and featured prominently in the 2003 film, “The Gospel of John.”

But what’s the reason mud was employed as a tool in this wondrous healing?

The author of a best-selling book decoding the hidden, additional meaning behind events in Scripture explored the miracle during an episode of the popular Bible TV show, “Shabbat Night Live.” 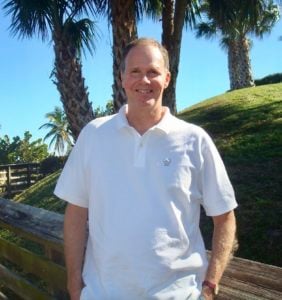 “The Bible is very consistent in its symbols and imagery,” said Joe Kovacs, author of “Reaching God Speed: Unlocking the Secret Broadcast Revealing the Mystery of Everything.”

The Bible records the event this way:

“After he said these things he spit on the ground, made some mud from the saliva, and spread the mud on his eyes.

“His neighbors and those who had seen him before as a beggar said, ‘Isn’t this the one who used to sit begging?’

“So they asked him, ‘Then how were your eyes opened?’ 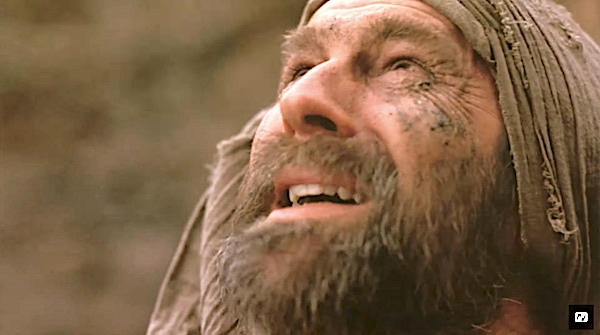 A blind man has his sight restored by Jesus after washing the mud off his eyes in 2003’s ‘The Gospel of John.’ (Courtesy Gospel of John Ltd.)

“On the physical level, a man blind from birth has his sight restored after God puts mud on the man’s eyes and then tells him to wash it off,” Kovacs writes in “Reaching God Speed.”

“When the Bible talks about mud or clay being spread onto the man’s eyes, it’s simply referring to the flesh that covers our spirit inside of us. Remember, mankind was created from ‘the dust of the ground’ (Genesis 2:7 KJV) , the land, the dirt, the clay, the mud. Our fleshly covering is made of clay.”

Meanwhile, Kovacs explains, “eyes” in Scripture can refer to spirits, as in “seven eyes, which are the seven spirits of God” (Revelation 5:6 CSB).

“So when Jesus put mud, or clay as some Bibles have it, over the man’s eyes, the meaning at God speed is that our personal spirit can’t see properly because we’re covered by the flesh, both physically and spiritually. Yes, we have skin covering our bodies, but more disturbingly, we have the lusts and works of the flesh, our personal desires and wrongful actions, blinding us from the truth.”

“The eyes are where we see things, but when you have flesh over your eyes, as in the lusts of the flesh, the works of the flesh, and the New Testament gets into this in quite detail about what those are.”

Some Bible examples of lusts and works of the flesh include:

“Now the works of the flesh are obvious: sexual immorality, moral impurity, promiscuity, idolatry, sorcery, hatreds, strife, jealousy, outbursts of anger, selfish ambitions, dissensions, factions, envy, drunkenness, carousing, and anything similar. I am warning you about these things—​as I warned you before—​that those who practice such things will not inherit the kingdom of God” (Galatians 5:19–21 CSB).

“We all once conducted ourselves in the lusts of our flesh, fulfilling the desires of the flesh and of the mind, and were by nature children of wrath, just as the others” (Ephesians 2:3 NKJV).

In “Reaching God Speed,” Kovacs writes: “Obviously, when we’re driven by what our flesh wants, that does not lead to eternal life. We’re soiled by our individual desires and actions that don’t agree with the Spirit of God. We have to wash our personal spirits clean of the ‘mud,’ which symbolizes the flesh. That is the precise reason Jesus tells the man to wash the mud off his eyes. He is telling mankind to remove the desires of our flesh from our spirits, our minds, so we’ll no longer be spiritually blind.”

“Also notice that the man was not healed instantly while he still had the mud on his face. God instructed him to do something, to take action, which was to go to a pool with the name of ‘Sent.’ When he obeyed God’s commandment, when he went where he was being ‘sent’ by God, it was then that he was healed. In other words, mankind gets healed and can see properly when we follow God’s commands, go to the place to which we’re being sent, and wash the desires of the flesh from our minds. In the final end, as you know, we completely get rid of our mud, our physical flesh, and will be transformed into spirit only. That’s when we have life without end and will see perfectly.”

(Those wishing to contact or interview Joe Kovacs can email him here).

Endorsed by Chuck Norris and other Christian champions, “Reaching God Speed” is nothing short of a breakthrough work, as it probes God’s hidden messages embedded in popular movies, hit songs from (Adele and the Beatles to Frank Sinatra and Led Zeppelin), the stories we tell our children, everyday phrases we all say, historic news events, famous commercial campaigns, nature itself, and typical life activities such as such as inhaling every breath you take, sleeping, waking up and many more.

It features a myriad of stunning biblical revelations, as the book:

The book rocketed to the #1 position in several Amazon categories both before and since its official release.

(Note: ‘Reaching God Speed’ is now an audiobook, plus Amazon has hardcover editions of this book back in stock! Hardcovers may also be available through other booksellers, including Barnes & Noble, Books-A-Million, and ConservativeReaders.)

Why does the Bible stress baby Jesus was wrapped ‘in swaddling clothes’?

Finally emerging: The beast, mark and number of the beast revealed

Revealed: Your own identity carries divine ‘name of God’

God revealing your future through one thing that happens every day

End-time alert: Why does Jesus say ‘no flesh would be saved’?

‘The Terminators’: Battle over birthing (and killing) kids has extra dimension

Secrets of Sodom and Gomorrah unearthed, including pillar of salt

Is vicious attack on Bible hero a violent assault against God?

‘You can’t unsee it!’: Mind-blowing double and triple meaning in 1 resurrection verse

Most famous verse in the Bible is ‘misunderstood by millions’

Does one intriguing line from ‘Star Wars’ telegraph God’s purpose for humanity?

Is Russia-Ukraine war sending a repeated message from God?

Major newspaper in Israel probes ‘dilemma’ on crucifixion of Jesus

The gospels say Jesus crucified in Jerusalem: Why does Revelation say Sodom and Egypt?

‘I’ve fallen, and I can’t get up!’: Is God hidden in commercials?

The ultimate lockdown plan: ‘What if COVID was only the opening act?’

Mystery of Jesus writing in the dust: Hundreds of prophecies ‘unsealed’

Is every single word we speak packing a hidden message from God Himself?

‘Breathtaking’ Bible secret hidden in every breath you take

Unveiled: Incredible secrets of the birth of Jesus come to life