Upstart Craters As Stimmy Bonanza Ends With A Shocking Bang

Upstart Holdings shares cratered 60% after the cloud-based “artificial intelligence lending platform” shocked markets by cutting full-year revenue guidance on macro uncertainties and a possible recession. The stock was last trading at $30, down from $80 yesterday, and a whopping $400 in mid-October.

While the results were dismal, it is what the company said on its earnings call that has spooked investors with substantial carryover into the broader macro environment.

First, the company said that investor demand for loans dried up due to rates/credit move, forcing UPST to originate loans (with rising default rates) on its balance sheet that it couldn’t pass to its funding partners – something that shouldn’t happen for an automated platform/tech company (as Stephens UPST analyst Vincent Caintic warned “If UPST will use its balance sheet to support its transaction volume, then we will ascribe a balance sheet multiple”). And yes, as we have been warning for the past year, this is the hangover from the Biden stimmy bonanza. As the company itself warned, while government stimulus in 2020 and 2021 led to an artificially benign environment, all that has now “reverted abruptly”, and loan defaults are again spiking. 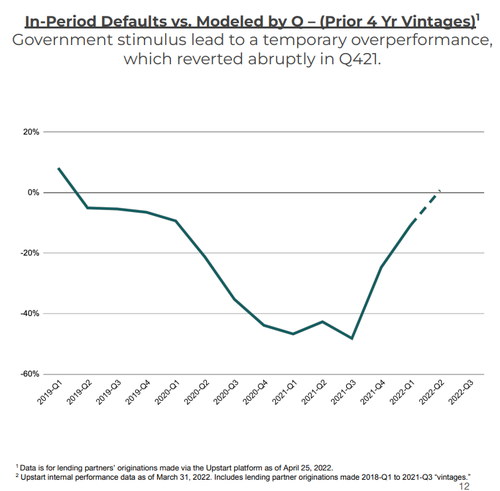 Second, as Alex Good points out, the problem wasn’t on the volume side: “The volume of loan transactions across our platform in Q1 was 465,000 loans, up 174% year-over-year and representing over 350,000 new borrowers”. However, management cautioned that adding another 3-5% of cost on the loans was slowing demand.

Instead, as noted above, the company insisted that problems were due to stimulus ending. “think the bottom line is when you go through a period where the government essentially pays everybody’s salaries for most of a year and then suddenly stops, it’s a pretty damn difficult thing to calibrate exactly right.”

Needless to say, that’s when the defaults start. But there’s more, because adding insult – or rate hikes – to injury, Upstart said that if rates keep going up along with spreads, consumers will reject financing and forbearance terms need to get harsher which will spike rates further, creating a toxic loop.

Echoing these concerns, Morgan Stanley writes this morning that reflective of their lowered 2022 growth outlook (and below-consensus 2Q22 expectations), management stressed the impact of higher funding costs on their growth algorithm, particularly as it pertains to APR offers. Estimating that average loan pricing on their platform is up ~300bps since Oct ‘21, management flagged consumer price sensitivity to rates as a deterrent to loan demand.

Bottom line, UPST’s 1Q22 print and outlook demonstrated the company’s cyclical sensitivities, both with regards to macroeconomic factors and interest rates, which are likely to reflect on growth trajectory over the medium term.

More concerning is what this means for the state of the US consumer, which is still largely (and incorrectly) viewed as strong. Recall last Friday we showed that credit card use by Americans soared the most ever in March!

Far from a bullish read – i.e., “consumers are so bullish about the future, they are maxing out their credit cards like never before” – what the surge in credit card use means, is that having long ago spent their saved Biden stimmies, consumers have no other place to source their spending (as the UPST results indicate) and are instead rushing to take advantage of still low APRs before the rates reset (much higher). Of course, those APRs will reset and the new rates will apply to the new, record, balances causing a sharp increase in mandatory interest payments.

The conclusion is that the US consumer is about to hit an epic brick wall, with spending about to crater, and sending GDP sharply lower (recall consumption is 70% of US GDP).

Going back to UPST, at least three analysts, including Citigroup, Piper Sandler and Stephens, downgraded the stock following its results. Here’s what the analysts have to say: