As President Biden and his administration continue to burnish his “tough on China” credentials (which is shaping up to be a “theme” for the White House in July), the US has just announced that 4 Chinese nationals have been charged with computer intrusion in the US.

The US is expected to say Monday that the Chinese government has been the mastermind behind a series of malicious ransomware, data theft and cyber-espionage attacks against public and private entities, including the Microsoft Exchange hack uncovered earlier this year.

According to Bloomberg, the US will present evidence showing how China’s Ministry of State Security uses criminal contract hackers to conduct unsanctioned cyber operations globally, including for its own personal profit. Additionally, the NSA, CISA and FBI will expose more than 50 tactics Chinese state-sponsored cyber hackers have used.

Before now, the US has stopped short of publicly blaming Beijing for the Microsoft hacks.

Though of course this isn’t the first we’re hearing of the Microsoft Exchange hack, or other Chinese cyber-intrusions. Following ransomware attacks like the one that crippled the Colonial natural gas pipeline, cybersecurity has become an increasingly important political priority this year. The measures are also reminiscent of Biden’s old boss President Obama, who once charged 5 Chinese military personnel over alleged involvement in a cyberattack on American corporations. Of course, that turned out to be a lot of chest-beating and not a lot of action.

From the looks of it, the US isn’t alone in this. A coalition of NATO members along with the EU, New Zealand, Japan and Australia are reportedly launching a new alliance between the NATO members that involves sharing intelligence on cyber-threats and collaborating to improve their networks security. Microsoft blamed that attack on a China-backed group called Hafnium, according to CNBC. 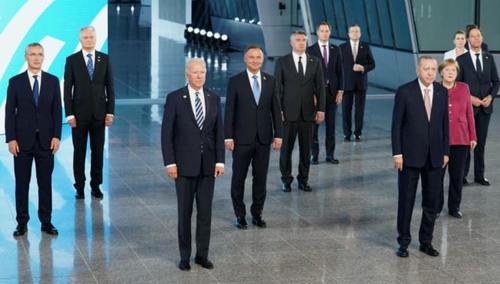 They’re also expected to join the US in blaming China and its intelligence apparatus for ordering hacks including the Microsoft Exchange intrusion.

CNBC pointed out that the new alliance follows Biden’s lobbying NATO and EU members for support in adopting a more “confrontational” approach to China’s cyber-activities.