The Fed’s latest Flow of Funds report released at noon today showed the latest snapshot of the US “household” sector as of Dec 31 2020, which confirmed that not long after the biggest drop in household net worth on record when $8 trillion was wiped out in Q1, 2020, in the 4th quarter of 2020, the net worth of US households soared by $6.93 trillion – the second biggest quarterly increase in history – to a record $130.2 trillion.

As a percentage of Disposable Personal Income, total assets also hit a new all-time high of 853% of DPI, while net worth was 754% of disposable income, also a record high.

Real estate ($32.0 trillion) and directly and indirectly held corporate equities ($39.8 trillion) were among the largest components of household net worth. Homeowners’ real estate holdings minus the change in mortgage debt rose $654.5 billion (a positive value indicates that the value of real estate is growing at a faster pace than household mortgage debt). Finally,owners’ equity as a percentage of total real estate value rose to 65.87% to a level of $21.103 trillion

Household debt grew by 6.5% in the fourth quarter of 2020. Home mortgages increased by 5.2%, after growing by 5.7% in the third quarter. Nonmortgage consumer credit increased at a more moderate 2.3% pace, about the same pace as in the third quarter. The increase in consumer credit reflects growth in auto loans and student loans, while credit card balances continued to decline. Alarming growth in margin debt also boosted household debt growth over the second half of 2020. 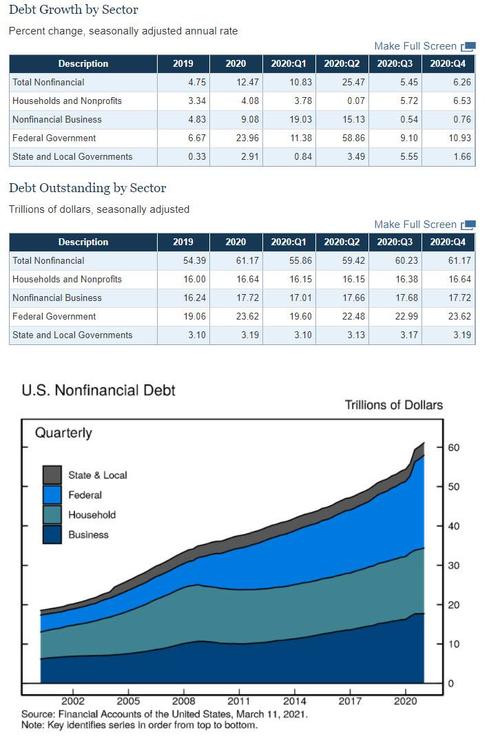 Looking at the various components of nonfinancial business debt, nonmortgage depository loans to nonfinancial business declined $118 billion, reflecting forgiveness of loans extended under the Paycheck Protection Program, or PPP, and weak loan origination. Nonmortgage depository loans had expanded notably over the first half of 2020 as firms tapped their lines of credit at banks and PPP loans were disbursed. Partly offsetting the decline in nonmortgage bank loans, corporate bonds continued to increase, although at a slower pace than in the second and third quarters. 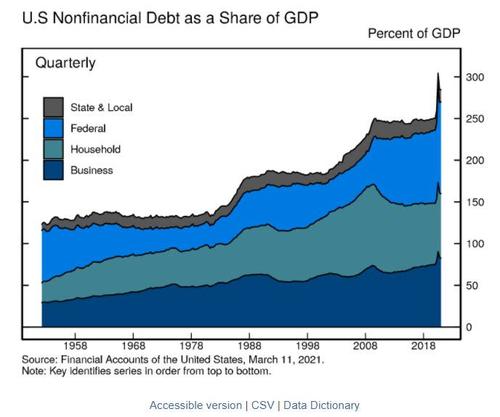 Overall, outstanding nonfinancial corporate debt was $11.1 trillion. Corporate bonds, at roughly $6.5 trillion, accounted for 59% of the total. Nonmortgage depository loans were about $1.1 trillion. Other types of debt include loans from nonbank institutions, loans from the federal government, and commercial paper. 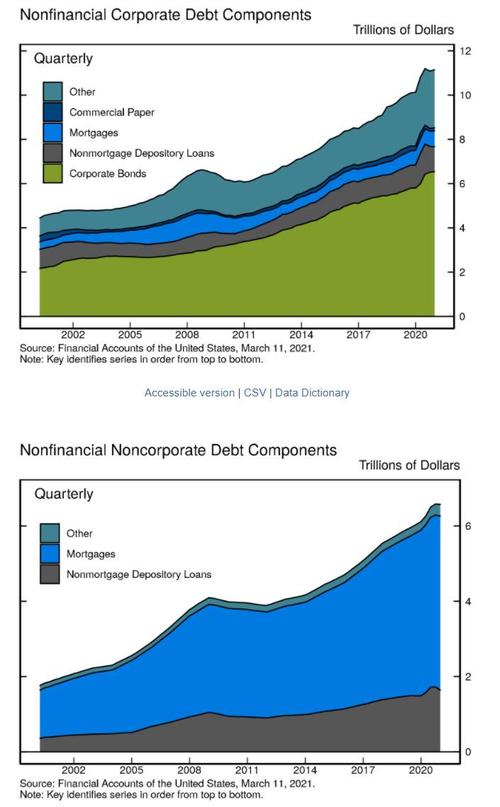 The bottom line is that (especially if one ignores the debt – which clearly will be monetized or hyperinflated by the Fed before it all comes crashing down) the US economy has never been stronger. And while it would be great news if wealth across all of America had indeed risen as much as the Fed claims, the reality is that there is a big catch: as shown previously, virtually all of the net worth, and associated increase thereof, has only benefited a handful of the wealthiest Americans.

According to a record Census Bureau report, over the past decade, during an economic expansion that benefited most Americans, the richest made out the best. In fact, the CB found that the top 5% of households – those making $451,122 on average last year – have seen their inflation-adjusted incomes jump 28% since 2009. 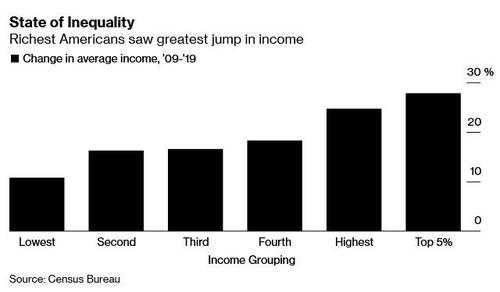 A separate breakdown of the change in net worth, as also discussed previously, one which looks at median net worth by age of head (of household) shows that the oldest Americans – those 65 and older – have seen gains in their net worth by over 60%, while everyone else is either flat or down! 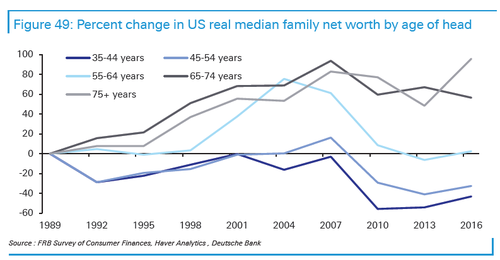 This underscores just how endemic poverty is in America, even in times of economic expansion. While incomes have increased, so has the cost of living, with consumer prices rising 20% since 2009. Meanwhile, while financial assets – those which have grown the most in the past decade – soaring thanks to the Fed’s generous monetary policy and benefiting those who own financial assets, this turns out to be a tiny sliver of the population. In the CBO’s latest, if somewhat dated, Trends in Family Wealth analysis published in 2016, the budget office showed a breakdown of the net worth chart by wealth group, which sadly shows how the “average” American wealth is anything but, and in reality most of that $100 trillion belongs to just 10% of the US population. The distribution has only gotten worse since then. 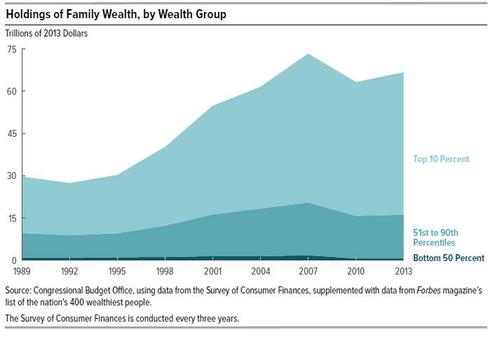 Here is how the CBO recently explained the wealth is distributed: 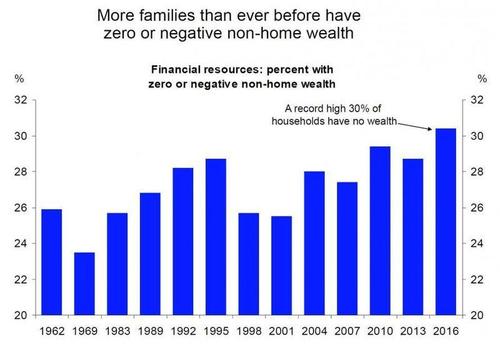 Even worse, when looking at how wealth distribution changed since the 1980s, an even more dire picture emerges: family wealth grew at significantly different rates for different segments of the U.S. population. In 2013, for example:The wealth of families at the 90th percentile of the distribution was 54% greater than the wealth at the 90th percentile in 1989, after adjusting for changes in prices.

The above is particularly topical at a time when both parties is trying to take credit for any fledgling US recovery. Here, while previously Democrats, and now Republicans tout the US “income recovery” they may have forgotten about half of America, but one entity remembers well: loan collectors. As the chart below shows, America’s poor families have never been more in debt. 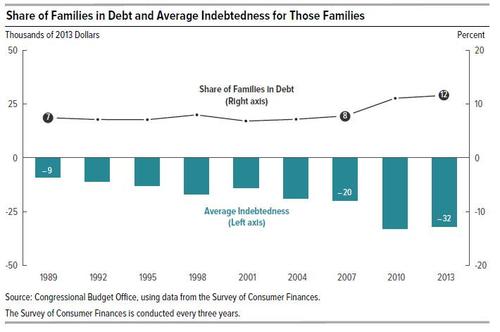 And there – as we say quarter after quarter- is your “recovery”: the wealthy have never been wealthier, while half of America, some 50% of households, own just 1% of the country’s wealth, down from 3% in 1989. And finally, America’s poor have never been more in debt.