US Producer Prices Surge Most On Record

After consumer prices exploded higher yesterday – and were immediately rejected by establishment types as ‘transitory’, despite the market’s obvious disagreement – all eyes were on this morning’s producer prices for signs of more pressure. Many were fearful of a repeat of last month’s debacle  delay (and there were rumors of a softer PPI print leaked earlier today)

The rumors were wrong as April Producer Prices exploded 6.2% YoY (well ahead of the 5.8% expected) which was clearly impacted by the base effect of last year’s collapse, but even sequentially, the PPI print was shockingly hot, rising 0.6% MoM (double the +0.3% expected). Excluding food and energy, so-called core PPI advanced even more, or 0.7%. 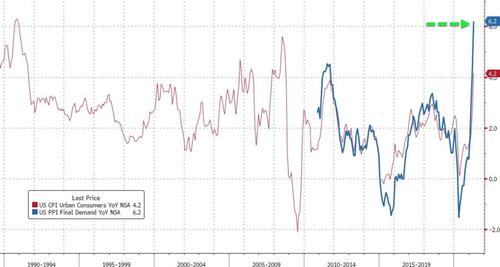 That was the biggest YoY jump on record:“There is more inflation coming,” Luca Zaramella, chief financial officer at Mondelez International Inc., said on the food and beverage maker’s April 27 earnings call.“The higher inflation will require some additional pricing and some additional productivities to offset the impact.”

jumped 0.7% from the prior month and increased 4.6% from a year earlier.
Michael Hsu, chief executive officer at consumer-product maker Kimberly-Clark Corp., said in April that the maker of Scott toilet paper and Huggies diapers is “moving rapidly especially with selling price increases to offset commodity headwinds.”

Digging below the surface further, ex-food, energy, and trade, producer prices soared 4.6% YoY, the most on record also. 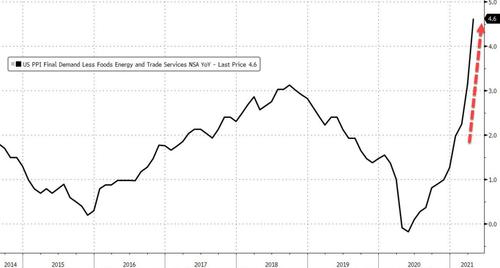 Some more details at the final demand level: 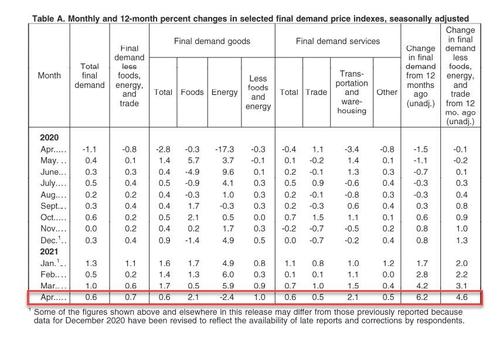 Yesterday’s data – which showed the strongest monthly gain in the overall consumer price index since 2009 – suggested companies are passing along at least some of the input-price inflation.. and today’s PPI surge suggests that push through to CPI is far from over.