“In stark contrast with the mindset of corporate leaders who are dealing daily with the reality of higher and persistent inflationary pressures, the transitory concept has managed to retain an almost mystical hold on the thinking of many policy makers,” El-Erian wrote in an Oct. 25 op-ed in Bloomberg.

“The longer this persists, the greater the risk of a historic policy error whose negative implications could last for years and extend well beyond the U.S.,” he argued.

It would appear from the accelerating flattening of the yield curve, that the market is believing El-Erian’s narrative.

Expectations for rate-hikes are being pulled forward by the market… 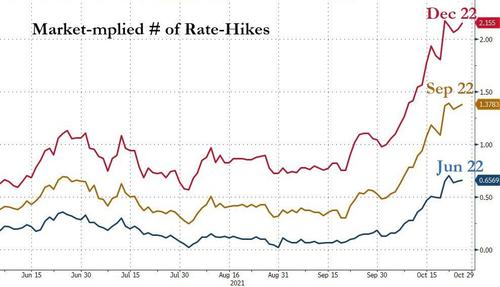 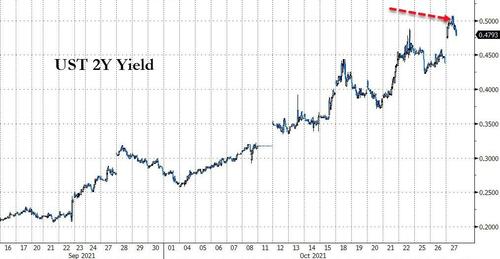 And as rate-hikes are increasingly priced in, the long-end of the curve is tumbling… 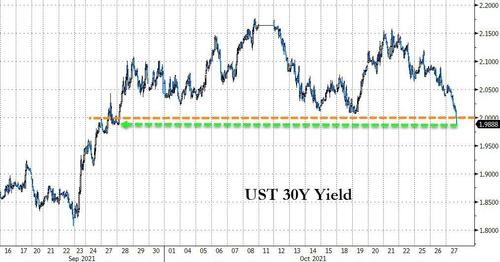 Crushing the yield curve to its flattest in 18 months… 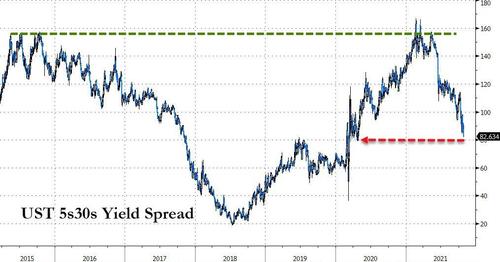 We give the last word to El-Erian, who said he fears that Fed officials will double down on the transitory narrative rather than cast it aside, raising the probability of the central bank “having to slam on the monetary policy brakes down the road—the ‘handbrake turn.’”

“A delayed and partial response initially, followed by big catch-up tightening—would constitute the biggest monetary policy mistake in more than 40 years,” El-Erian argued, adding that it would “unnecessarily undermine America’s economic and financial well-being” while also sending “avoidable waves of instability throughout the global economy.”

His warning comes as the Federal Open Market Committee (FOMC) – the Fed’s policy-setting body – will hold its next two-day meeting on November 2 and 3.