The Vatican revealed that it owns more than 5,000 properties last week after releasing information on its real estate holdings for the first time ever.

The information was made public as part of “a consolidated financial statement for 2020 for the Holy See and the first-ever public budget for the Administration of the Patrimony of the Holy See”, according to Reuters. It amounted to more than 50 pages of information about the Vatican’s financial position.

Of the more than 5,000 properties, 4,051 are in Italy and about 1,120 are abroad. Only 14% of the Vatican’s properties in Italy are rented at market rates, with the rest being rented at discounts, mostly to church employees. 40% of buildings were “institutional buildings such as schools, convents and hospitals”.

The disclosure comes days before a trial of 10 people connected to the purchase of one building in London’s smart South Kensington district. That building led to “enormous losses” after being purchased as an investment in 2014 by the Vatican’s Secretariat of State.

Father Juan Antonio Guerrero, head of the Vatican’s Secretariat for the Economy, commented that the trial would be a “turning point” in credibility for the Vatican and that a similar situation could not happen again due to new measures put into place.

“Pope Francis stripped the Secretariat of State of control over its funds” last year, Reuters noted. 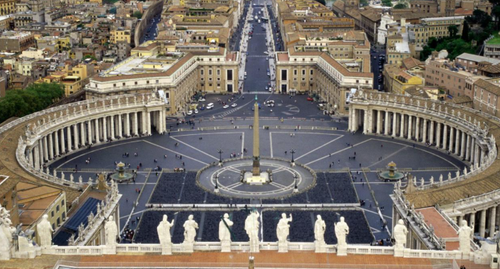 Recall, just days ago, we wrote about a £30,000 per week luxury flat, owned by the Vatican, that was making news for receiving complaints about “hellish” noise.

Complaints about “loud events” with some involving DJs, were lodged with the local council, we noted. The unit is 9,000 square feet and houses a large garden and indoor swimming pool.

The property was bought among other luxury London properties in 2014 in a purchase that was “overseen by cardinal Giovanni Angelo Becciu”. Becciu was the first cardinal in modern times to be charged with financial crimes by the Vatican this year.

Other investments overseen by Becciu have been “under mounting international scrutiny as a result of the allegations brought against him”, the FT reported last week. The London flat, and other properties, are held through Jersey shell companies through a Vatican unit in charge of “charitable donations that are intended for the poor and needy”.