Identifying real estate bubbles is a tricky business. After all, as Visual Capitalist’s Nick Routley notes, even though many of us “know a bubble when we see it”, we don’t have tangible proof of a bubble until it actually bursts.

And by then, it’s too late. 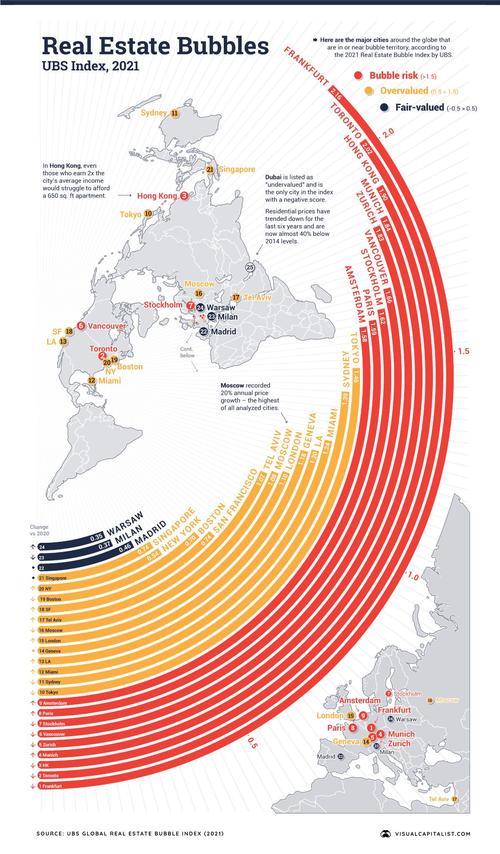 The map above, based on data from the Real Estate Bubble Index by UBS, serves as an early warning system, evaluating 25 global cities and scoring them based on their bubble risk.

Bubbles are hard to distinguish in real-time as investors must judge whether a market’s pricing accurately reflects what will happen in the future. Even so, there are some signs to watch out for.

As one example, a decoupling of prices from local incomes and rents is a common red flag. As well, imbalances in the real economy, such as excessive construction activity and lending can signal a bubble in the making.

With this in mind, which global markets are exhibiting the most bubble risk?

The Geography of Real Estate Bubbles

Europe is home to a number of cities that have extreme bubble risk, with Frankfurt topping the list this year. Germany’s financial hub has seen real home prices rise by 10% per year on average since 2016—the highest rate of all cities evaluated. 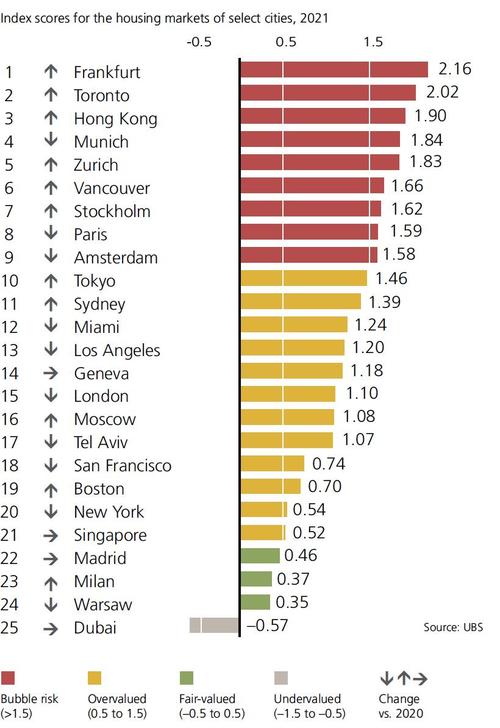 Two Canadian cities also find themselves in bubble territory: Toronto and Vancouver. In the former, nearly 30% of purchases in 2021 went to buyers with multiple properties, showing that real estate investment is alive and well. Despite efforts to cool down these hot urban markets, Canadian markets have rebounded and continued their march upward. In fact, over the past three decades, residential home prices in Canada grew at the fastest rates in the G7.

Despite civil unrest and unease over new policies, Hong Kong still has the second highest score in this index. Meanwhile, Dubai is listed as “undervalued” and is the only city in the index with a negative score. Residential prices have trended down for the past six years and are now down nearly 40% from 2014 levels.

Note: The Real Estate Bubble Index does not currently include cities in Mainland China.

Overheated markets are nothing new, though the COVID-19 pandemic has changed the dynamic of real estate markets.

For years, house price appreciation in city centers was all but guaranteed as construction boomed and people were eager to live an urban lifestyle. Remote work options and office downsizing is changing the value equation for many, and as a result, housing prices in non-urban areas increased faster than in cities for the first time since the 1990s.

Even so, these changing priorities haven’t deflated the real estate market in the world’s global cities. Below are growth rates for 2021 so far, and how that compares to the last five years. 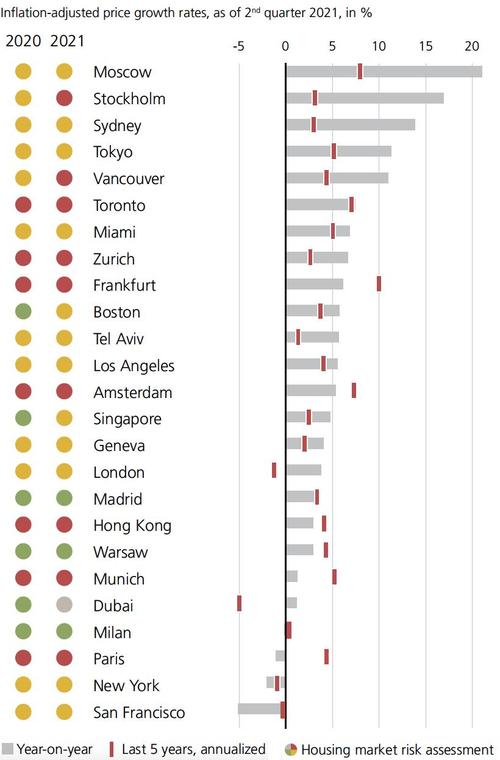 Overall, prices have been trending upward almost everywhere. All but four of the cities above—Milan, Paris, New York, and San Francisco—have had positive growth year-on-year.

Even as real estate bubbles continue to grow, there is an element of uncertainty. Debt-to-income ratios continue to rise, and lending standards, which were relaxed during the pandemic, are tightening once again. Add in the societal shifts occurring right now, and predicting the future of these markets becomes more difficult.

In the short term, we may see what UBS calls “the era of urban outperformance” come to an end.