The Lloyd’s Market Association’s Joint War Committee has labeled the Black Sea, a major artery for the movement of commodities from Europe to the rest of the world, one of the riskiest areas for vessels to sail. That means insurers will charge war-risk premiums that will make vessels uninsurable due to high costs.

Four shipping insiders told Bloomberg that underwriters are charging up to 10% of the vessel’s value. Some insurers are quoting premiums so high that companies have second thoughts about retrieving energy, steel, and agricultural products from port cities around the Black Sea.

Insurers’ top concerns are naval mines, rocket attacks, and Ukraine or Russia commandeering the ship because of “national security threats.” Two weeks ago, Turkey’s Bosphorus Strait, which connects the Black Sea to the Sea of Marmara, was shuttered (for a few hours) due to the discovery of a naval mine.

The Black Sea is bordered by a dozen countries and ports that export energy, steel, and agricultural products worldwide. One shipping insider said insurers’ rates are rising because the pool of them offering coverage is shrinking. 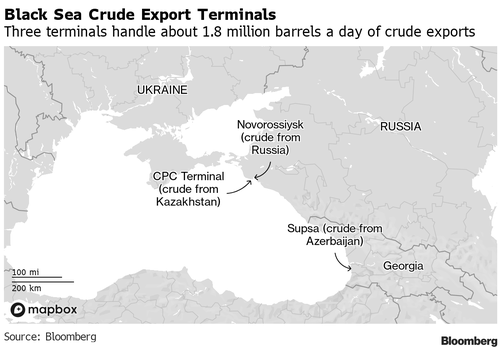 Data from Bloomberg showed that hiring a tanker with a million-barrel cargo from the Russian Black Sea port of Novorossiysk to Italy would usually cost around $700k and has since jumped to $3.5 million because of war-risk premiums. The added cost has made ships uninsurable and deterred companies from sailings in the area. This will continue to disrupt exports from the region and keep global commodity supplies tight; thus, higher prices will stick around for longer.