An Australian Boeing C-17 Globemaster III transport jet, one of the largest in the world, conducted one of the most insane aerial stunts as it weaved in between skyscrapers on Thursday. 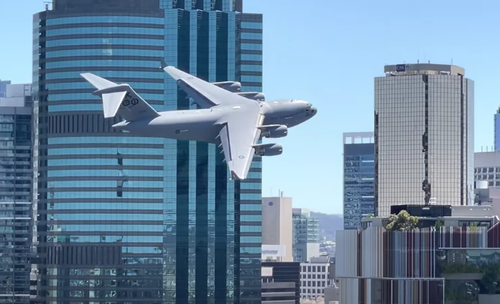 The extremely low fly-by in Brisbane, Australia, was in preparation for the annual Sunsuper Riverfire festival today, Sat. 25, according to a RAAF press release.

Here’s the video of the C-17 in downtown Brisbane. You can hear the person filming the rehearsal flight saying, “holy shit.”

While the video looked amazing, Task & Purpose spoke with one USAF C-17 pilot who said the low fly-by was extremely dangerous.

“If the crew’s timing is off or if they are slow to react, the jet would collide with a building. Very risky,” said the pilot, who wanted to remain anonymous.

He explained in the US, C-17 pilots must fly 1,000 feet above building structures in populated areas. Even during flyovers for sporting events, the transport plane cannot fly below building tops.

“Those Brisbane videos are insane,” the pilot said. “We could never do something like that in the USAF. If we did, we would lose our wings immediately — never fly again.”