A wild storm furiously churned over the Outer Banks of North Carolina on Tuesday and resulted in the collapse of two oceanfront homes. One of the collapses was caught on video. 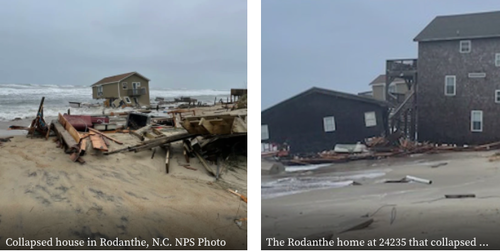 The National Park Service tweeted a shocking video of waves crashing ashore in Rodanthe, snapping the wood pilings that held up a single-family beach house as it fell into the ocean and was swept out to sea.

Cape Hatteras National Seashore (Seashore) has confirmed that an unoccupied house at 24265 Ocean Drive, Rodanthe, N.C. collapsed this afternoon. This is the second unoccupied house collapse of the day at the Seashore. Read more: https://t.co/ZPUiklQAWA pic.twitter.com/OMoPNCpbzk

A beach house at 24235 Ocean Drive in the same area collapsed hours before because of heavy surf. There was no video of the collapse. 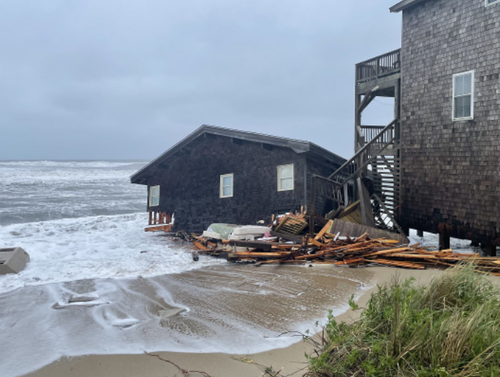 The National Weather Service at Newport/Morehead said the storm “that been hanging around the last few days makes its closest pass to us tonight before it finally sinks south.”

This pesky low that’s been hanging around the last few days makes its closest pass to us tonight before it finally sinks south.

Conditions improve tomorrow before we enter a wetter pattern (that will hopefully bring some much needed rain) to end the week pic.twitter.com/8AVfIZb25M

“Unfortunately, there may be more houses that collapse onto Seashore beaches in the near future,” David Hallac, superintendent, National Parks of Eastern North Carolina, told local news WAVY.

How long until climate alarmist Greta Thunberg unleashes a tweetstorm about the Outer Banks?