Even as concerns about rare but deadly side effects remain, and questions about vaccines’ efficacy against the delta variant persist, the White House is finally ready to unveil its timeline for doling out “booster” shots to high-risk Americans (and later for everybody) even as billions of people around the world have yet to receive even a single jab.

Even though the WHO has warned it will only serve to worsen vaccine inequality, and Israel’s Health Ministry has found that even with a third dose, mRNA jabs like the Pfizer and Moderna jabs are less than 90% effective at preventing COVID, the White House is pressing ahead with its plan to vaccinate Americans 8 months after getting their first shot, with the jabs becoming an annual tradition for most as the virus continues to evolve, becoming a chronic threat, like the flu.

According to a joint statement from Biden’s team on Wednesday, additional Pfizer and Moderna jabs “will be needed to maximize vaccine-induced protection and prolong its durability.”

“Based on our latest assessment, the current protection against severe disease, hospitalization, and death could diminish in the months ahead, especially among those who are at higher risk or were vaccinated during the earlier phases of the vaccination rollout,” according to a statement citing health officials including Centers for Disease Control and Prevention Director Rochelle Walensky, Food and Drug Administration Acting Commissioner Janet Woodcock, Surgeon General Vivek Murthy, and infectious disease expert Anthony Fauci.

The boosters will initially be given to healthcare workers, nursing home residents and older people, all of whom were among the first groups to be vaccinated in late 2020 and early 2021.

“The available data make very clear that protection against SARS-CoV-2 infection begins to decrease over time … and in association with the dominance of the Delta variant, we are starting to see evidence of reduced protection against mild and moderate disease,” the officials said. “We conclude that a booster shot will be needed to maximize vaccine-induced protection and prolong its durability.”

Shares of Moderna briefly traded higher on the news. 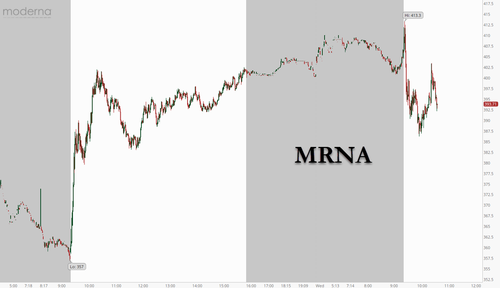 It’s expected the first booster jabs will reportedly be available to all Americans after Sept. 20, even though the FDA hasn’t yet signed off on included booster jabs in its emergency authorization for the mRNA vaccines. Which begs the question: Why aren’t we waiting to follow “the science”?

During Wednesday’s press conference, which is slated to begin at 1100ET, Biden’s top COVID advisers are expected to recommend that Americans get a third dose 8 months after their second dose, even as the FDA says there’s no evidence yet whether a third dose will actually help people with healthy immune systems.

And according to its report on the press conference, CNN says public health officials “aren’t convinced” that Americans need a third shot.

The FDA will also have a chance to decided on exactly who is eligible for the boosters (just the most vulnerable, or everyone?). But we’re waiting to hear whether the third jab will be required to consider an individual “vaccinated”? And then will they need a fourth, and then a fifth etc. to maintain that status?