At some point in the near future, Texas and Florida may be the only US states with billionaires as liberal strongholds continue to explore new ways to extract money from their wealthiest residents.

Now, Washington State – which has no income tax, is targeting its ultra-wealthy residents, which would put Jeff Bezos and Bill Gates directly in the crosshairs.

Under a bill proposed by Democratic Rep. Noel Frame of Seattle, a 1% tax would be levied on “extraordinary” intangible financial assets held anywhere in the world – including cash, stocks, bonds, publicly traded options and futures contracts, according to ABC News. The first $1 billion would be exempt from the tax.

Forbes magazine says about a dozen of the richest people in the world live in Washington state, including Bezos and Gates, who top the global list after making their fortunes from their respective tech companies, Amazon and Microsoft.

About 100 taxpayers in the state have wealth in excess of $1 billion, according to the state Department of Revenue. –ABC News

“It actually really isn’t about them, it’s about the working people of Washington who right now are disproportionally paying for community investments like public education, public health, you name it,” said Frame, adding “This is about equality in the tax code.” She says that her proposal would bring in an estimated $2.5 billion to the state every year, and would be imposed beginning January 1, 2022 for taxes due in 2023.

The measure was floated on Tuesday before the House Finance Committee, where Frame serves as chairwoman. The bill notably doesn’t define how the income will be spent, but Frame pointed to “programs like a tax credit for low-income workers that could benefit from the revenue.” In other words, a slush fund.

(Bill Gates when the wealth tax kicks in)

Frame has the support of 25 other House Democrats who have signed on – however ABC News notes that legislative leaders in the chamber say its too early to know if it will pass. If it does, it would be the “first of its kind” in the nation, according to Jackson Brainerd, senior policy specialist with the National Conference of State Legislatures.

New York and California have both explored taxing the ultra-wealthy, though the former is only looking at taxing current income, while California is mulling a 0.4% annual tax on a resident’s worldwide wealth over $30 million.

Frame said Washington — one of just a few states without an income tax — leans too heavily on its sales tax, disproportionately affecting those with less income.

She cited a recent report that found the collective wealth of the nation’s billionaires has increased by $1 trillion during the pandemic, at the same time small businesses were closing and a record number of Americans sought unemployment benefits.

“I think that the coronavirus has really laid bare the inequity that always was there,” she said. “But now people really understand it.” –ABC News

We should note, it doesn’t stop there – as the wealth tax is going global with left-leaning lawmakers from Chile to the UK floating new proposals to levy the coffers of millionaires and billionaires.

Argentina approved a one-time wealth tax last month, and Bolivia’s legislature, fulfilling a campaign promise by its new socialist president, passed an annual levy on large fortunes at the end of the year. Lawmakers elsewhere in Latin America — such as Chile and Peru — have recently pushed for similar measures.

And in the U.S., even though President-elect Joe Biden isn’t a fan of a wealth tax, progressives are pushing forward on the state level. They’re starting in two Democrat-controlled states, California and Washington, where at least six of the world’s 10 richest people reside. –Bloomberg 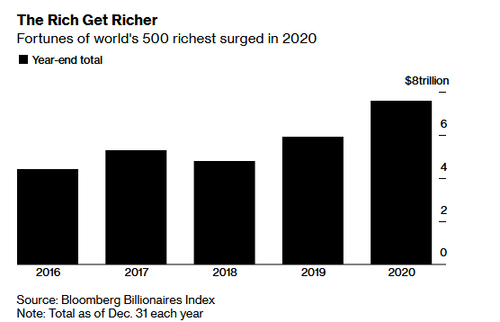 “All around the world you see increasing awareness of growing wealth and income inequalities, combined with growing awareness that our tax system is not up to dealing with this problem,” Indiana University law professor David Gamage, who has helped develop wealth tax proposals, told Bloomberg last month.

Not everyone is a fan, however. Washington Rep. Drew Stokesbary (R) called the proposed state measure “a pretty bad idea,” due to constitutional issues over the targeting of one class of taxpayers over another, as well as the fact that billionaires will just move to avoid the tax. He also thinks it’s a slippery slope.

“It sets a very troubling precedent,” he said. “If 7 million Washingtonians gang up on the nine richest this year, what’s to stop us from ganging up on the next thousand richest the next year and so on.”