Over 1,300 pissed off Southwest Airlines pilots picketed outside of Dallas Love Field on Tuesday, demanding better treatment from the airline for both passengers and employees. 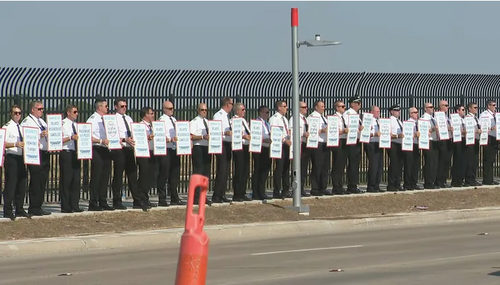 The protest, led by the Southwest Airlines Pilots Association – the union representing the pilots – called the demonstration an “informal picket” to raise awareness over pilot fatigue, stress, the pilot shortage and other issues that have caused chaos across the country, according to NBCDFW.

The pilots are lining the entrance to Love Field. They will be in place until noon holding signs in silence. pic.twitter.com/J7TlZv7I5r

“Our pilots have had to address the fatigue issue with management publicly, which is something that we never want to do, but ultimately, our pilots have been tired and have been trying to do everything they can,” said Capt. Casey Murray, a pilot and president of the SWA Pilots Association. “Our contract is going to provide a framework to correct some of these inefficiencies we are actually seeing on a day-to-day basis and that our guests feel every day.” 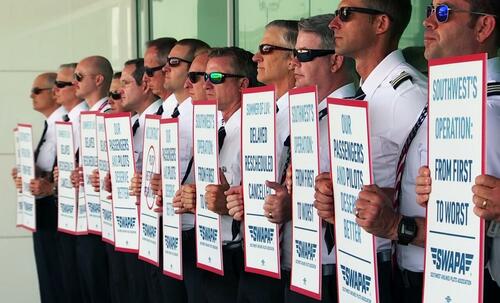 “I think all of our guests have seen where pilots aren’t in position. They are taking delays, cancellations at times.“

According to Fox4, pilots are sick of having to tell passengers “I’m sorry” over delays and cancellations on just about every flight.

The union has warned that this will be a challenging travel season as the industry grapples with pilot shortages, poor scheduling, pressure to work overtime, and insufficient downtime between flights.

According to SMU economist Mike Davis, there’s no easy fix.

“There’s an awful lot of forces of nature that the airlines have to deal with. The pilot shortage… the airlines can’t automatically create people who are good pilots. It takes a long time and at the end of the day the cost of all this mess is going to be born by the consumer,” he said.

“The airlines, if they do cut back on their schedules it’s going to make it much more difficult to book a flight and when you can find a flight it’s going to be more expensive,” said Davis.