Authored by Chris Menahan via InformationLiberation.com,

MSNBC brought together a focus group of Pittsburg-area Trump voters to badger them about the supposed horrors of the January 6th “insurrection” only to have all their propaganda shut down in humiliating fashion. 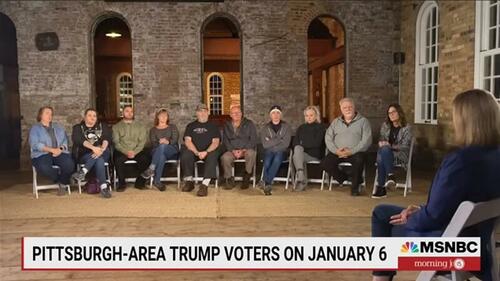 MSNBC tries to push the January 6th scam on a focus group and they are not having their nonsense pic.twitter.com/DAIjuYRPen

Elise Jordan, the bimbo who hosted the event, was of course wrong when she claimed a cop died during J6 — Officer Sicknick, a Trump supporter himself, died of natural causes a day later according to the DC medical examiner’s official autopsy report (which they waited over three months to release).

Trump protesters have broken through barriers at the US Capitol pic.twitter.com/9IgXQkGorE

Jordan was also wrong when she suggested Trump supporters breached the Capitol after Trump’s speech was over. The Capitol barriers were breached at 1 p.m. while Trump was still speaking, just as the female Trump supporter said.

Jordan was wrong again when she said Pelosi had “no authority whatsoever” over deploying the National Guard.

The House sergeant-at-arms, who could have requested National Guard troops but decided not to due to concerns about “optics,” reports to the House speaker, who was Nancy Pelosi at the time.

[Former Capitol Police Chief Steven Sund] told the Post that House Sergeant-at-Arms Paul Irving was concerned with the “optics” of declaring an emergency ahead of the protests and rejected a National Guard presence. He says Senate Sergeant-at-Arms Michael Stenger recommended that he informally request the Guard to be ready in case it was needed to maintain security [on Jan 4th].

[…] Sund says he requested assistance six times ahead of and during the attack on the Capitol. Each of those requests was denied or delayed, he says.

Washington, D.C., Mayor Muriel Bowser also wanted a light police presence at the Capitol. She reportedly wanted to avoid a similar scenario as last summer, when federal forces responded to demonstrators opposed to police abuses who assembled near the White House.

Jordan was also simply lying when she claimed she saw footage of Jan 6 protesters throwing excrement on the walls of the Capitol, no such footage has ever been released. That disgusting claim was put out by unnamed staffers of Sen. Chuck Schumer on Jan 7 and they said they saw “brownish footprints” on the ground, not on the walls.

If Jordan spent half as much time reading the news as she does on her appearance perhaps she could have avoided making an ass out of herself.

Regardless, Democrats are so delusional that no one at MSNBC caught any of these mistakes before taking the piece to air.

As Peter Strzok revealed last week on MSNBC, Democrats think the September 11th attacks were “nothing” compared to January 6th — so there’s no amount of hysterical exaggeration that’s too much!

While framing it against 9/11, Nicolle Wallace claims January 6 was “the deadliest attack on the U.S. capital in history.”
Disgraced and corrupt former FBI agent Peter Strzok agrees, saying: “9/11 is nothing compared to January 6” and demands leaders “be on the same war footing.” pic.twitter.com/lI1KTYnE2f

Jan 6th was worse than 9/11 and Pearl Harbor combined!