Earlier this week, Democrats in the House dragged the CEOs of America’s largest oil companies before a Congressional subcommittee where they were subjected to an aggressive interrogation (intended, of course, to glean clips to be used for the onslaught of political ads expected to be released this fall), where members accused them of deliberately driving prices higher to boost their companies profits. 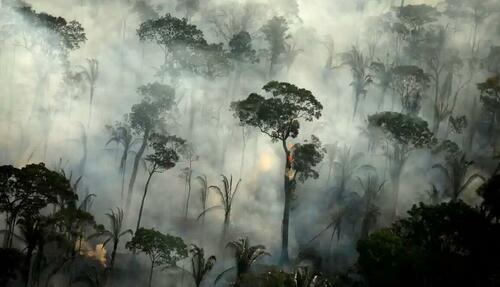 But as they carefully explained in their testimony, individual American oil companies have little control over the price of oil and gas. Rather, entities like OPEC+, and international demand dynamics have a much greater impact. The real hypocrisy, however, is the fact that Democrats’ own energy policies – including a key metric called the “social cost of carbon” which Biden hiked from $7 under Trump to $51 under Biden – are responsible for suppressing domestic production.

And as millions of Americans struggle to make ends meet during a period of soaring inflation, climate activists, seemingly unsympathetic to their plight, are doing everything in their power to drive oil and gas production in the US even lower.

Using the release of the IPCC’s latest report on climate change as their rallying, climate activists like the members of “Scientist Rebellion” (an offshoot of the UK’s “Extinction Rebellion”) are now claiming that the world has only three years to prevent the climate apocalypse. This despite last year’s admission from the UN that its most dire projections are now “extremely unlikely”.

But ignore all that, because as one climate scientist-turned-activist wrote in the Guardian this week, climate radicals are chaining themselves to JP Morgan’s offices in protest of the bank’s work financing the oil and gas industry.

I’m a climate scientist and a desperate father. How can I plead any harder? What will it take? What can my colleagues and I do to stop this catastrophe unfolding now all around us with such excruciating clarity?

On Wednesday, I was arrested for locking myself to an entrance to the JP Morgan Chase building in downtown Los Angeles with colleagues and supporters. Our action in LA is part of an international campaign organized by a loosely knit group of concerned scientists called Scientist Rebellion, involving more than 1,200 scientists in 26 countries and supported by local climate groups.

Our day of action follows the IPCC Working Group 3 report released Monday, which details the harrowing gap between where society is heading and where we need to go. Our movement is growing fast.

The new report is called the “Climate Change 2022: Mitigation of Climate Change”. It’s the third and final installment of the IPCC’s Sixth Climate Assessment. And contributors to the report have been telling any liberal media outlet that will listen that humanity now has only three years to prevent the climate catastrophy.

Here’s a summary of the report, courtesy of Buzzfeed:

Global average emissions measured roughly 59 gigatons of carbon dioxide equivalent in 2019, about 12% higher than levels in 2010 and 54% higher than in 1990, per the new report. This is a staggering increase.

But the blame for rising emissions does not fall on everyone equally.

“The 10% of households with the highest per capita emissions contribute a disproportionately large share of global [greenhouse gas] emissions,” according to a summary of the new report. For example, in 2019, Small Island Developing States are estimated to have released 0.6% of global greenhouse gas emissions.

The only way to prevent widespread climate damage is to immediately stop this trend. To keep the 1.5 degree Celsius future alive, per the report, people worldwide must collectively peak their emissions by 2025 and then reduce emissions 43% by 2030. Crucially, this involves cutting emissions of the potent greenhouse gas methane by 34% by 2030.

Finally, by 2050, people must achieve net zero emissions, which is when they are releasing into the atmosphere the same levels of emissions they are pulling out of it.

UN Secretary-General further contributed to the hysteria by declaring that humanity is on “the fast track to climate disaster”.

“We are on a fast track to climate disaster,” United Nations Secretary-General António Guterres said on Monday while announcing the new report by the United Nation’s preeminent climate body, the Intergovernmental Panel on Climate Change.

“This is not fiction or exaggeration,” he added. “It is what science tells us will result from our current energy policies. We are on a pathway to global warming of more than double 1.5 degrees.”

One of the author’s of the report added that humanity must act now, or accept the worst-case scenario that climate activists have long described.

“It’s now or never, if we want to limit global warming to 1.5 degrees Celsius (2.7 degrees Fahrenheit),” Imperial College London’s Jim Skea, one of the report co-authors, said in a statement. “Without immediate and deep emissions reductions across all sectors, it will be impossible.”

So, according to the climate radicals, the world has seen the timeline for the climate apocalypse move from roughly a decade to just three years, even as the growth of emissions has been slowing this entire time.

Is it just us, or does something not add up here?