By Sofia Horta e Costa, Bloomberg markets commentator and analyst, who follows up on our Friday article “The Housing Market Is Almost Frozen” – An Even Bigger Problem Emerges For China” in which we discussed the spread of Evergrande’s contagion to Sunac

Sunac has become the latest Chinese developer to run into liquidity issues, underscoring the challenging environment for the industry as the nation’s property slowdown deepens.

The Hong Kong-listed real estate firm asked authorities in the city of Shaoxing for assistance after local housing curbs affected sales at one of the company’s projects, according to a letter from a subsidiary seen by Bloomberg. The market is almost frozen, the company said in the letter, addressing the local government. “We face huge pressure.”

Sunac’s plea for help shows the urgency of the cash crunch affecting the country’s indebted developers as the central government maintains rules to cut leverage in the industry and cool housing activity. China’s home prices are at risk of “meaningful downside” regardless of what happens to Evergrande, Citigroup analysts wrote in a recent note.

Sunac’s dollar bonds slumped on Friday after the letter circulated among credit traders, with the 5.95% note due 2024 dropping to the lowest price on record. Sunac has the third-biggest weighting on a Bloomberg index of Chinese high yield dollar bonds, after Kaisa and a riskier note sold by ICBC this month. 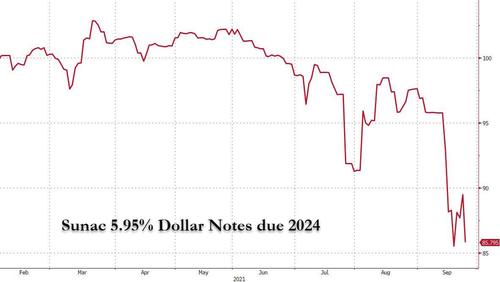 Sunac’s shares have slumped 50% this year, cutting the wealth of billionaire founder and chairman Sun Hongbin. He had a 44% shareholding in the company as of June, according to the data compiled by Bloomberg. The Tianjin-based business reported revenue of 230.6 billion yuan ($33 billion) in 2020.

The property market fallout is hurting companies in a stronger financial position than Evergrande. Sunac, which has high speculative-grade ratings at the three global credit risk accessors, has about half the liabilities of its larger peer Evergrande. Sunac complies with two of China’s debt metrics known as the three red lines, and it’s looking to sell assets including its indoor ski parks business to raise cash.

The Sunac group as a whole has “run into big hurdles and difficulties in terms of cash flow and liquidity,” it said in the letter.