As readers know, I am convinced that Putin’s toleration of insults and provocations has had the effect of encouraging more and worse provocations and not, as he intended, to downplay conflict.  As you also know, I am convinced that his “limited military operation” in Donbass designed to protect the Donbass Russians, formerly a part of Russia, from horrible abuse by Ukrainian forces and the neo-Nazi militias, was a mistake.  It is a mistake because the West characterized a limited operation as an “invasion of Ukraine,” and used its slow progress as evidence of Russian failure.  It is a mistake because the go-slow nature of the Russian offensive in order to minimize the impact on civilian lives and infrastructure gave the West plenty of time to convince itself to get more and more involved with diplomatic support, money, armaments and ammunition, training, and now with satellite  information for targeting the Russian forces. 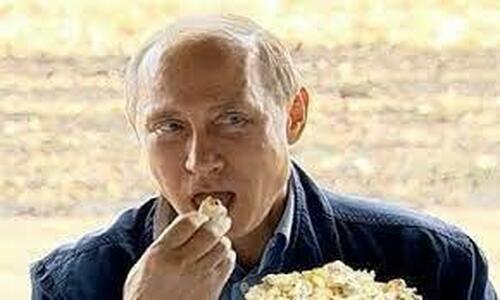 As I see it, Putin has been behaving as British Prime Minister Chamberlain is alleged to have behaved, thus encouraging more aggressive actions.  Wanting peace at all costs brings war.

As it is no longer possible for the Kremlin to speak of  “our Western partners” or to deny that the West is at war with Russia, the Kremlin, trying to avoid a war that it knows would be nuclear, has reached my conclusion of eight years ago that if the areas in today’s artificial borders of Ukraine that require Russian protection were reincorporated into Russia, the conflict would have to cease or become direct Western military aggression against Russia.  As Biden says he has no stomach for a war with Russia and will not permit one, and as NATO is incapable of such war, the referendums that begin today in the liberated areas of Ukraine, which without question will succeed, promise to reduce the threat of Armageddon.  Although in my opinion the leadership everywhere in the Western world is Satanic and insane, I do not think the Western governing elites are ready to commit suicide by attacking Russian territory. The West can say it doesn’t recognize the rights of people to self-determination, but if Russia says it is Russian territory, it is.

So that you understand, the referendums are Putin’s way of ending the conflict before it widens into nuclear war.  Putin’s rescue of the world from nuclear war will not be acknowledged by the Western presstitutes, Washington’s puppet EU and UK governments, or by the puppet who serves as NATO secretary general.

But what they think does not matter. Putin, belatedly, is doing his best to save us all from nuclear war.  Pray that he succeeds.

Putin’s success in forestalling nuclear war does not mean peace for Russia. The breakup of the Soviet Union by Washington that turned Soviet provinces or republics into independent states, together with the freedom the West has had for 30 years in funding NGOs and building subversive networks in the former Soviet provinces, gives Washington the opportunity to foment wars on the Russian Federation’s borders, as is now brewing between two former Central Asian Soviet Republics, Kyrgystan and Tajikistan and  to foment coups such as the one in the recent attempt in Kazakhstan. The empire served a security purpose to which Russia will eventually have to return if the West continues to operate against Russia.

We do not have Putin’s help with the other threats to Western Civilization that confronts us.  Internally the West is faced with an attack on itself by its own elites.  The West is everywhere discredited–in the universities, the public schools, the museums, the media, movies, the Democrat Party, the 1619 Project, Identity politics, Critical Race Theory taught in public schools to children, gender theory which teaches  that self-declaration, not biological fact, determines gender. Teaching children to be confused about their gender is an evil thing.

This illustrates that in the Western World lies takes precedence over facts.  Facts are whatever the elites and their  minions say.  They have no basis in reality.  Those who emphasize reality are “domestic terrorists” because they dissent from the official narratives that cannot be supported by factual evidence.  Multiculturalism has turned the American nation into a tower of babel, and Identity Politics has destroyed unity. The Democrat Party has been radicalized and is firmly arraigned against white  Americans who are undergoing a process of deracination and dispossession.

In my lifetime the US has been transformed from a nation into a tower of babel and from a relatively free society into a police state.  The transformation into a tower of babel was an intentional policy designed to drain power from the white population.  The police state has rapidly developed in the 21st century as a response to 9/11 which was orchestrated partly for that purpose.  With half or more of the white population’s legitimacy challenged by the White House, with Constitutional protections eroded, and with the criminal justice system weaponized against Trump and his supporters, the United States is being primed for civil war.

In former times the US government acted to protect the people from monopolies with progressive measures, such as the Sherman Anti-Trust Act, today a dead letter law.  Beginning with the Clinton regime, monopolization, already present from the destruction of independent businesses by big box store chains, has grown dramatically.  Clinton signed off on the concentration of the media in a few hands. The large banks were given enormous power by the repeal of the Glass-Steagall Act.  The unregulated digital revolution has produced a monopoly over digital communication which is used to censor and suppress free speech.  Big Pharma and the medical insurance companies are in the process of completing their control over medicine by forcing independent medical practices into large health care organizations where doctors are employees subject to Big Pharma protocols.  They achieved this by having medical insurance and Medicare pay a larger percentage of amounts billed to the large bureaucratic entities than to private practitioners. The financial difference forced doctors to sell or merge their practices into the larger entities and means the end of the Hippocratic Oath as we saw with Covid when doctors who are employees of hospitals and HMOs were prohibited from treating patients with HCQ and Ivermectin.

Big Pharma’s power over medicine and legislators was demonstrated last month when the California legislature passed Big Pharma’s bill to punish doctors who saved lives by using HCQ and Ivermectin.  The bill defines “scientific consensus” as whatever Big Pharma influenced/controlled NIH, CDC, and FDA say it is.  Under the bill, doctors are guilty of “unprofessional conduct” and can lose their licenses for disseminating “misinformation or disinformation related to COVID-19, including false or misleading information regarding the nature and risks of the virus, its prevention and treatment; and the development, safety, and effectiveness of COVID-19 vaccines.”  https://www.globalresearch.ca/all-eyes-gov-newsom-california-looks-pass-nations-first-law-punish-doctors-covid-misinformation/5793420  In other words, doctors and medical scientists who disagreed with Big Pharma shill Fauci and saved lives are to be kicked out of medical practice.

Big Pharma, with its grants to medical schools, its funding of medical research that serves its profits, its influence over medical journals and public health agencies and regulators such as NIH, CDC, and FDA, and its lobbying power with legislatures, has gained control over the practice of medicine.

Wherever you look in the Western world autonomy is disappearing.  People have less and less control over their lives and their children.  If they express thoughts contrary to official narratives they risk their jobs and financial security.  Today’s intrusions into the family were unthinkable a few decades ago. Digital money, which is in the works, will terminate all human autonomy.  If you annoy the government you will be cut off from your funds.  What you can spend money on will be controlled in the interest of profits for the favored and whatever cause or ideology is prevailing, such as health, a green world.  Digital money is not cash. You can’t keep a supply of purchasing power at home.  Governments can prevent the use of digital money from purchasing disfavored products.

Once the media becomes a propaganda ministry, as the Western media is, it is easy to steal the people’s freedom.  An excuse can always be found or orchestrated–national security (9/11), medical emergency (Covid pandemic), Insurrection by MAGA Republicans.  By the time a trusting and gullible public catches on to a former deception they are in the middle of a new one.  As the erosion of freedom is gradual nothing is done about it.  As the young only know what they are born into, the growing restraints on freedom are normality to them.  The young don’t miss what they never experienced, and they do not know what has been lost.

If Putin succeeds in stopping the march into nuclear war, we still face the challenge that we are being transitioned into a police state.  Putin is not going to come liberate us, so what is to be done?  How can we claim the high ground when we have been marginalized as racists and insurrectionists?  How can we organize when the FBI will descend upon us declaring us to be domestic extremists who are a threat to America?

In Canada liberty is in its death throes.  In Germany and other parts of Europe historians cannot report  facts that expose the falsity of official narratives.  The outcome of the November congressional and 2024 presidential elections could leave us with a one-party state, which is the Democrats’ intent.  Knowing that they will be protected by the presstitutes, the Democrats can again steal the election or Biden can declare that a MAGA election plot has been uncovered and federalize the election.

Russia, China, India, Iran, and other countries outside the Western world are moving forward with the Shanghai Cooperation Organization that is creating a new center of power, while the West declines politically, economically, morally, and culturally as the confidence of people who formerly comprised nations continues to be destroyed by anti-white propaganda.

If you want to comprehend the collapse of the West, compare, for example, Liz Truss and her UK government with the British government around the middle of the 19th century. James Grant in his biography of Walter Bagehot reports, for example, that Prime Minister Gladstone translated Horace and Homer, published substantial works on religion and Neapolitan politics, and addressed the Ionian assembly in classical Greek. Parliamentarian Robert Lowe was fluent in Sanskrit. Sir George Lewis was the author of Survey of the Astronomy of the Ancients. The House of Lords had its own learned members. Henry Herbert, 4th Earl of Carnarvon, was a Fellow of the Royal Society, Britain’s National Academy of Sciences.  Today we have presidents and prime ministers who can’t speak English.

In the US merit has been redefined as racist, and educational standards have been so lowered that the large grocery store chains do not trust their checkout clerks to give change.

The Western world has sunk so deeply into depravity that today depravity is celebrated. Young school children are subjected to performances by drag queens paid for by property taxes.  Depravity now has its own flag and proud marchers.  Do we really want to go where we are being led?