Authored by Andrea Widburg via AmericanThinker.com,

There are so many things wrong with the story of Thomas Barrack that it’s hard to know where to begin.

Briefly, Biden’s DOJ charged Barrack, the man who chaired Trump’s inaugural fund, with illegal lobbying for the UAE.  Then, for the 74-year-old Barrack to get out of jail, a federal magistrate imposed a $250,000,000 bail on him, along with other serious restrictions on travel.  This is a travesty of justice and a clear threat to Trump allies, past, present, and future. 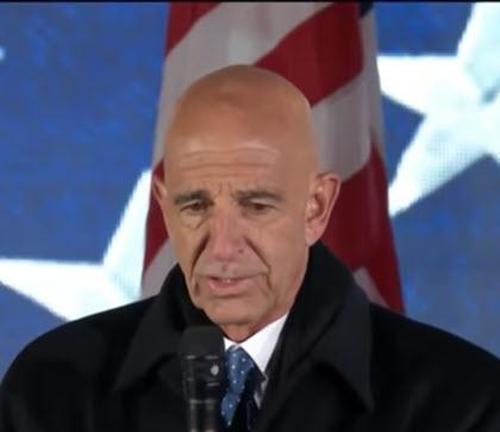 As always, the Daily Mail has a good summary:

Donald Trump‘s billionaire ally Thomas Barrack is being released on $250 million bond after being charged with illegally lobbying the Trump administration on behalf of the United Arab Emirates.

The 74-year-old reached a deal with prosecutors on Friday that will see him released from custody while he awaits trial on charges of illegal lobbying.

A federal magistrate judge in Los Angeles signed off on the conditions of the agreement, which will include surrendering his passport, complying with a curfew, and wearing an ankle bracelet with GPS monitoring.

The agreement also calls for Barrack to put up a $250 million bond, secured by $5 million cash, which would be forfeited if he does not appear for court proceedings.

Barrack, who chaired Trump’s inaugural fund in 2017 and founded the private equity firm Colony Capital, waived his right to appear in federal court.

He will be arraigned in federal court in Brooklyn, New York on Monday.

There are several points to be made here, which I offer in no particular order:

One: Before the Democrats weaponized it, few people had ever been prosecuted as unregistered foreign agents under the Foreign Agents Registration Act (FARA).  An article from 2010 reveals that the act was intended to sweep up foreign nationals:

The major roll-up of 11 Russian spies-cum-suburbanites involves the relatively rare use of the criminal code that requires agents of foreign powers to register with the U.S. Justice Department – a provision that allows prosecution of covert foreign operatives working without diplomatic immunity.

By 2010, when people were swept up under the act, they were working for hostile governments, as was the case with Robert Cabelly, a former State Department official under George H.W. Bush and Clinton who worked for Sudan, and Frank Duran, a Venezuelan national who worked for Hugo Chávez.

By 2019, when the leftist Foreign Policy declared that the Act “is broken,” it also noted that its purpose, when enacted in 1938, was to combat fascist propaganda and that, since then, it was a “previously obscure piece of legislation.”  The same publication noted that it was Mueller who revitalized it to go after Trump allies.

Just to remind you of the uneven application of this law, the DOJ, which has long been a leftist swamp, ignored it entirely when Tony Podesta represented a bank that was tied to Russian spying agencies.

Two: Given that FARA was meant to protect against people sneakily representing enemies of the United States, it’s telling that, in Barrack’s case, the DOJ brought the charge against someone working with the United Arab Emirates.  The UAE not only has a friendly relationship with America but is also completely dedicated to the Abraham Accords with Israel.  It seems likely that the Biden administration is sending a “back off” message to anyone who gets too friendly with a nation the left wants to destroy.  Certainly, MSNBC wants everyone to understand that any Mideast nation friendly with Trump is a Biden enemy.

Three: The trend across Democrat-run cities and states across America is to do away with bail.  After all, no one would expect a repeat violent offender, released without bail, to commit another violent crime or make a run for it.

However, an elderly man with an ankle bracelet and a seized passport nevertheless must put up $250,000,000 in bail.  You don’t correct the age-old situation of having one law for the rich and one for the poor by relieving the poor of any obligations under the law and treating those rich people who aren’t political allies as if every one of them is Jack the Ripper.

Four: What’s happening to Barrack has nothing to do with law or justice.  This represents the left’s continued persecution of anybody who worked with Donald Trump.  The clear intent is to make sure that everyone gets the message that, if Trump runs again, whether he wins or loses, those who work with him will be completely destroyed — not just shunned and barred from the “right” parties, but ground into dust.

The peaceful, constitutional transition of power in America cannot include hunting down every ally of the previous administration and destroying those people.  But if it does — if that’s what the Democrats have set as the new standard — game theory says we win by doing this twice as hard (and on much better evidence) when Republicans gain power from the corrupt, feckless Democrats.