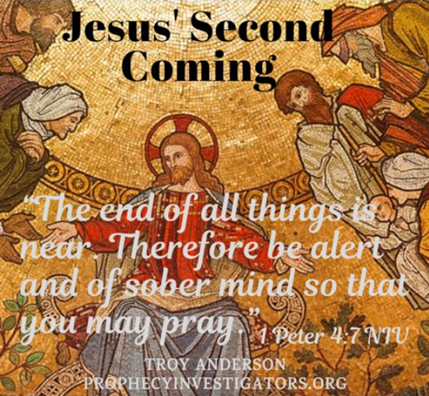 The following article, What Did Peter Mean by "The End of All Things is Near"?, was first published on The American Vision.

While there has been a dramatic shift in Bible prophecy teaching since I started writing, speaking, and debating the topic when I was in seminary in the mid-1970s, there are still a lot of people who continue to push the belief that we are living in the last days. The following meme caught my attention, especially when there were a lot of “Amens” in the responses:

What “end” was Peter referencing? Certainly not the end of the entire physical universe since dispensationalists and other futurists believe that 1 Peter 4:7 is dealing with events leading up to something called the rapture, and there’s a lot that follows after the rapture. Here’s what I wrote in response to the post:

Peter wrote this nearly 2000 years ago. “Near” (literally: “has drawn near”) in 1 Peter 4:7 does not mean 2000 years. What Peter was describing was the near end of the old covenant order that was in the process of passing away,  a point made by the writer of Hebrews: “When He said, ‘A new covenant,’ He has made the first obsolete. But whatever is becoming obsolete and growing old is ready [lit. near: ἐγγὺς] to disappear” (Heb. 8:13). That old covenant fully passed away when the temple was destroyed in AD 70. That’s what was near (see Matt. 24:1–4, 34).

Last Days Madness is a comprehensive study of Bible prophecy covering everything from time texts and end-time signs to the “rapture,” antichrist, the man of lawlessness, the Olivet Discourse, and much more. It will change they way you read the Bible. Eschatology changes everything.

In an unrelated message to me, I was told that “near” to God can mean a very short time, so 2000 years is no problem for someone interpreting 1 Peter 4:7 and Hebrews 8:13 in such a way so that “near” can mean an undetermined amount of time. When someone makes this claim, for me, it’s the end of the discussion since it makes the Bible unintelligible.

“[T]he Greek adverb eggus … means to bring near, to draw nigh, be at hand’ (Liddell & Scott, Greek Lexicon, p. 189)” and “Greek language expert Dr. Joseph Thayer [who] says that when it used in reference to time it is ‘concerning things imminent and soon to come to pass’ (Greek-English Lexicon, p. 164).”

The Old Covenant was replaced with a better covenant in the person and work of Jesus Christ who embodies all that the Old Covenant could only represent in temporal (stones) and fallen elements (human priests). Jesus is the lamb of God who takes away the sin of the world (John 1:29), the temple built without hands (John 2:13–22; see Mark 14:58; 15:29; Acts 6:14), the fulfillment of the Davidic kingship (Acts 2:22–36), and “a high priest, who has taken His seat at the right hand of the throne of the Majesty in the heavens, a minister in the sanctuary and in the true tabernacle, which the Lord pitched, not man” (Heb. 8:1–2).

There is another component to consider in the interpretive process: audience relevance. How would John’s audience have understood the prophecy? Even today, prophecy preachers turn to the time indicators in Revelation and argue that Jesus is coming soon. But if “soon” means near to the time when we hear a prophecy enthusiast say that Jesus’ coming is “soon,” then why didn’t “soon” mean what we understand “soon” to mean to Revelation’s first readers?

Dave Hunt’s book How Close Are We? includes the following subtitle: “Compelling Evidence for the Soon Return of Christ?” What did Mr. Hunt want his readers to understand by his use of the word “soon”? He certainly didn’t have in mind nearly 2000 years in the future from the time he wrote his book in 1993.

On the Brink is the title of a prophetic work written by Daymond R. Duck. In the introduction Duck tells his readers that his book has “300 Points of Light on the Soon Return of Jesus.” [1] Duck and Hunt want their readers to believe that Jesus’ coming is going to take place soon, and by soon, they mean near, and by near they mean in this generation, and by “this generation,” they mean this one here and now. Why didn’t “soon” and “near” mean “soon” and “near” to those who read these time words in the first century?

If you are looking for a verse-by-verse study of Matthew 24, Wars and Rumors of Wars is the book you want. It is comprehensive and covers all the arguments by those who claim Jesus was describing some worldwide end-time event.

Chuck Smith published The Soon to be Revealed Antichrist in 1976. What did Chuck Smith mean by “soon”? While he says we can’t know who the antichrist is, he does say “God is giving us many signs that we are nearing the last days—the stage is being set.” Smith also stated that “we are living in the last generation, which began with the rebirth if Israel in 1948 (see Matt. 24:32–34).” [2] We get some idea from these comments what Smith means by near.

What did these authors intend for their audience to understand with words like “at hand,” “soon,” and “close”? Does anybody think that these books would have sold well if they carried a title like “We Don’t Know When the Antichrist Will be Revealed So Quit Asking”? The authors purposely chose time words to put readers on the edge of their prophetic seats because they know that “soon,” “close,” and “at hand” mean soon, close, and at hand.

Chuck Smith used these easily understood time references to persuade his 1976 reading audience that they were “nearing the last days” and “this generation” is their generation. So why didn’t Jesus’ audience interpret these words and phrases in the same way and apply them to their time? They did, and that’s the point.

The Bible does not tell us that Jesus would come “at any moment” spread out over several millennia. The New Testament makes it clear that Jesus’ coming was “near,” close at hand, for those living in the first century. Here are some examples:

These verses, and others like them, clearly state that Jesus’ return was “near.” Dispensationalists like to claim that Jesus could come at “any moment” to “rapture” His church. There is no such doctrine in Scripture. “That James does not expect the period to be long is clear when he says the parousia of the Lord (cf. 5:7) is near.” [3]

In the closing chapter of Revelation John is told, “Do not seal up the words of the prophecy of this book, for the time is near” (Rev. 22:10). This contrasts with what was told to Daniel hundreds of years before: “But as for you, Daniel, conceal these words and seal up the book until the time of the end; many will go back and forth, and knowledge will increase” (Dan. 12:4; also 8:26, 10:14).

The end that was revealed to Daniel was the end the New Testament describes in great detail without any equivocation that was near for those in Peter’s day.

The following books related to Bible prophecy are available at American Vision:

Continue reading What Did Peter Mean by "The End of All Things is Near"? …