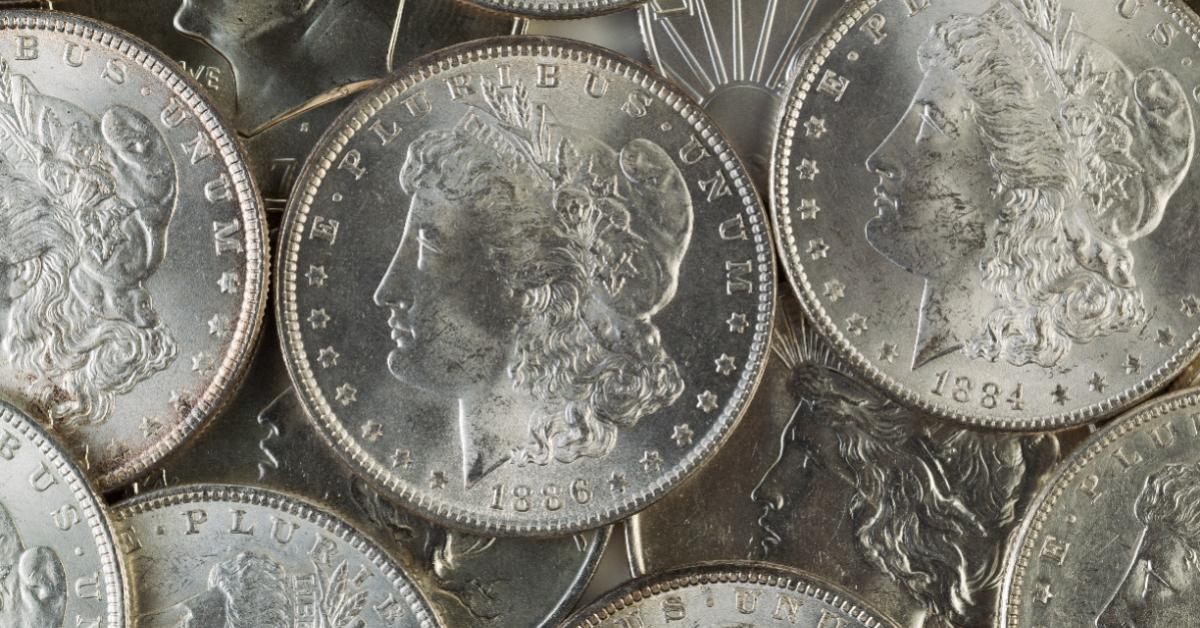 When I was a child, my mother and I would take the Long Island Railroad to Brooklyn to see relatives a few times a year. My grandfather was always outside in front of the apartment house in Park Slope, where he and my aunts and uncles lived. Upon seeing him, I would run down the sidewalk to greet him, but before I could say “Hi, Grandpa!,” he would without fail press a shiny silver dollar into my hand.

He was a quiet, dignified man with a big white mustache. Since he spoke hardly any English, and I spoke hardly any Italian, we had to make do with silent monetary exchanges like these: he gave me shiny, silver dollars, and I took and spent them. Since this was back in the ’50s, a dollar (silver or otherwise) would buy a whole afternoon of fun. I could take in a double feature at the movies, buy a bag of popcorn and a Baby Ruth, and still have change.

The silver dollars I got from my grandfather looked like the one above. I learned later that the peace dollar, as it was called, was designed by the Italian immigrant and sculptor Antonio de Francisci to commemorate the end of World War I. The model for the image of Lady Liberty that adorns the face, or obverse, of the coin was his wife, Teresa. On the coin’s reverse appears a perched bald eagle above the word peace. After my grandfather died, I often wondered if he had known the history of that coin.

The peace dollar, like the Morgan dollar that preceded it, was not a popular coin (except perhaps with my grandfather and me), and millions of such coins sat in bank vaults across the country. Its size and weight made it inconvenient for use as a general medium of exchange. Most people preferred, instead, to carry paper money, which they could fold and slip inside their wallets. I didn’t have a wallet back then, and I Iiked the sound and feel of a silver dollar jingling in my pocket.

But despite their unpopularity, silver (and gold) coins played an important role in our nation’s monetary history until America finally abandoned both, first gold for domestic transactions in 1933, then silver in 1962, and finally gold for international transactions in 1971. America, like the rest of the world, had abandoned both the gold and silver monetary standards and resorted to the printing of fiat currency—money by government edict, having no intrinsic value.

To understand the significance of this change, look at a 1928 US paper dollar and compare it with today’s paper money. You will notice that this dollar is called a silver certificate—not a Federal Reserve note. The difference in wording is not mere semantics. For beneath the title on the dollar bill we are informed:

This certifies that there has been deposited in the Treasury of the United States of America one silver dollar payable to the bearer on demand.

So, the silver dollars like the ones my grandfather gave me were not just sitting idle in dark bank vaults taking up space. Quite the contrary, these silver dollars gave validity to our paper money and served as sentinels lest government officials took it into their heads to print more money than could be redeemed in silver coins, for when the public became suspicious that the government is counterfeiting money, they could simply show up at their local banks early one Monday morning and demand silver dollars in exchange for their silver certificates. Such a run on banks could lead to a financial “panic,” forcing many banks to close their doors—an event nobody wanted.

For centuries, silver and gold thus served to limit the excesses of government borrowing and spending. As a result, both metals are the natural enemies of expansive governments, whose appetite for money can never be sated. And governments almost everywhere despise gold and silver for that very reason, often referring to them as “barbaric relics of the past.” But make no mistake, these two “relics of the past,” while no friends of tyranny, are precious in the eyes of all those who, like my grandfather, loved freedom.

In the last days of the Roman Empire, a Roman citizen fleeing the capital city before its fall in AD 410, which plunged Western civilization into an economic abyss lasting for centuries, may well have remarked: “Primo deformaverunt monetam nostram; tunc vitam nostram duxerunt” (First, they debased our currency; then they debased our lives). That the two are so intimately connected is an economic truth that even today is not widely understood.

48 mins ago
Supreme Court declines to take up 2020 case against Dominion, Facebook

54 mins ago
Who was Kirstie Alley and what was her cause of death?

55 mins ago
Who is Kirstie Alley’s ex-husband Parker Stevenson?

48 mins ago
Supreme Court declines to take up 2020 case against Dominion, Facebook

54 mins ago
Who was Kirstie Alley and what was her cause of death?

55 mins ago
Who is Kirstie Alley’s ex-husband Parker Stevenson?