What Jobs Number Will Scare Investors?

One week after he wrote that early indications point to a 1.5 million jobs number, Standard Chartered’s Global head of FX Research, Steve Englander has published an even more important report, one looking at what jobs number would scare investors into believing the economy is overheating even more than is accepted, and spook stocks into a selloff. Englander’s summary: 2 million+ April job additions are needed for investors to see risk that the Fed changes its stance; Meanwhile, the widely expected whisper range of 1.0-1.5 million jobs “may not be enough for the Fed to shift, even if jobs exceed the 1mn consensus.” Of course, the bar for a job growth surprise is higher if 10Y UST yields are above 1.60%, which is not too far from today’s 1.59% yield.

Below we excerpt from his latest note, “What job growth would scare investors?”

We expect the US April non-farm payroll report (NFP; released 7 May) to show an increase of 1.5mn versus the consensus of c.1mn, and the number could well be higher, in our view (Early leads point to 1mn+ jobs). Of 69 forecasters in the Bloomberg consensus, 33 see 1mn jobs or more; our forecast is close to the top.

Our judgment is that it would take 2mn jobs for investors to think that the Fed might reconsider its view that the tapering discussion is premature. We think investors will see anything below 1.5mn as a continuation of strong data, but not enough to shift the Fed. Between 1.5 and 2mn there is likely to be uncertainty on Fed perceptions.

2mn+ jobs would be enough to get 10Y UST yields back over 1.60%, in our view, even if such strength is not proof of what the Fed dubs “substantial progress”. This could further erode the low asset-market volatility of recent months. Below 1mn jobs, yields could come off sharply. We do not see 1.0-1.5mn jobs as a sufficiently significant positive surprise to bond investors. Yields could fall on relief that the surprise was not greater.

For FX, the 2mn+ outcome with higher yields would probably be risk-off, and a USD plus. Vulnerable high-yielding EM currencies such as the TRY would likely suffer the most. In G10, commodity currencies may be vulnerable because of positioning and because investors see the yield impact as more important than the activity surprise. The best outcome for EM and commodity currencies is probably job growth between the 900,000 and 1.25mn, strong but not threatening from a Fed perspective. 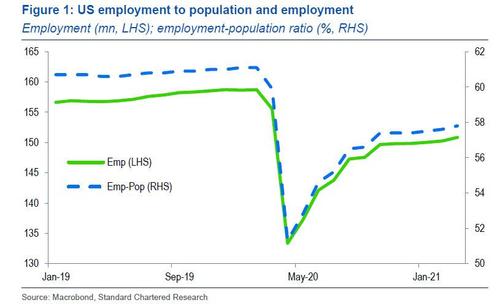 The adult population in the employment-to-population ratio is 260mn, so 1.3mn job additions would increase the ratio by c.0.5%. Fed officials, including Fed Chair Powell, point to this ratio as the key labour-market gauge. Recently, Richmond Fed President Barkin indicated that he wanted to see substantial progress in getting to the pre-COVID cycle high of 61.1% (Figure 1). We estimate that would require the creation of 9mn jobs, just over 1mn per month to get there by end-2021. Progress is not the same as complete retracement, so we think near 60.5% is probably close enough to satisfy the vague criteria; this would be about 8mn job additions over the next couple of months.

We think investors expect the spring and early summer months in the US to be the high point of reopening and job creation. April and May releases of 2mn+ jobs would be roughly half of the needed job creation, and so approach the employment-to-population target within a couple of months. If April jobs hit or ran below expectations of 1mn, there would be no room for significant deceleration to reach the target ratio before year-end. If April and May were at 1.5mn and June and July hit 1mn, 3mn jobs would be needed over the next five months, about 600,000 per month to get in the range. This is possible, but would depend on the market thinking that April’s job creation would not decelerate rapidly.

To us the key question is what number would lead the center of the Fed to consider the possibility that the economy is recovering faster than expected. We doubt that a single number would be enough to change the Fed’s stance, but it would focus attention on the next data release. Unusual reactions to surprises can occur if forecasters’ views differ from investors’. In addition, investors may sometimes delay investments in advance of a major data or central bank event for fear of being badly wrong-footed. When the event is past, they proceed with the intended transactions and sometimes this pent-up demand outweighs any impact from the surprise.

We also think that the initial level of bond yields matter. As of midday ET on 4 May, 10Y USTs yielded 1.58% and money-markets were pricing in slightly more than three Fed hikes by end-2023. If yields were above 1.60%, it would take a bigger surprise to push yields sustainably higher than if yields were 1.55%. We can imagine 10Y yields rising 8-10bps in the first instance on a 2mn+ NFP print, but see momentum fading and yields retracing a bit thereafter.

We are also cognizant of the risk of a short fall in jobs versus expectations. Only 2 of 79 forecasts are below 800,000, so the consensus of 1mn could generate a modest bond rally and 650,000 quite a move down. Given the volatility of labor-market data, such a print might not extinguish optimism, but it would raise the possibility that the market is wrong in its hawkishness and the Fed is right in its dovish stance. On such an outcome we could see 10Y UST yields drop below 1.50%. A weak number in isolation (i.e., if other indicators point to a robust reopening) might have a modest and possibly temporary negative impact on growth-linked currencies such as the ZAR and MXN. However, if a sequence of releases put the strong global growth story into question, equities could suffer, dragging down a broad set of risk- and growth-linked currencies.

Our discussion has been tied to NFP because that has been the focus of forecasters. However, much of the policy discussion relating to the employment-to-population ratio (and minority job gains) is derived from the household employment survey, which is independent of the payroll survey. On a month-to-month basis the employment numbers based on NFP are generally considered more reliable. The two measures of employment generally converge over roughly a 12-month period and tend to be more aligned when they are driven by large, common cyclical forces. We expect market reaction to first key off the NFP numbers and then the unemployment rate, because headlines focus on these. But there could be confusion if employment in the household survey diverges from employment in the payroll survey.