What Was The Vatican Searching For When They Built Secret Tunnel Under Jerusalem Church?

The Vatican has constructed a secret underground tunnel in Jerusalem that has infuriated a local preservation group who claim the tunnel resides in a sensitive area that may contain antiquities and other artifacts.

According to the petition submitted to the Jerusalem District Court, the Regavim Movement alleges the church concealed the existence of the 100-meter long tunnel that infringes on public property in an area allegedly known for archaeological remains. 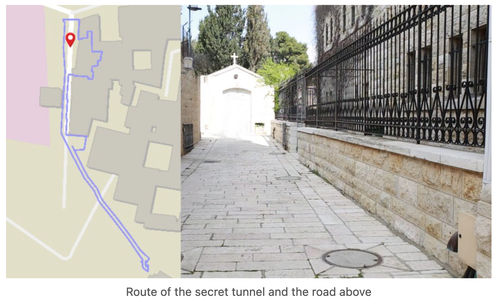 The petition says the tunnel connects the Church of the Dormition on Mount Zion in the Old City of Jerusalem to “Beit Josef,” a nearby guest house.

“When the details began to come into focus, we demanded over and over that the Jerusalem Municipality publicize the documentation of its findings, as required by the Freedom of Information Law. We further demanded that oversight, inspection and law enforcement procedures be taken immediately, to restore the site to its previous condition either by sealing off or demolishing the tunnel,” attorneys Avi Segal and Yael Cinnamon of the Regavim Movement told The Jerusalem Post.

“We filed this petition only when our repeated requests to the Jerusalem Municipality were not answered,” the attorneys said.

Naomi Kahn, director of Regavim’s International Division, told Jewish News Syndicate, “the fact that the State of Israel has not protected the antiquities that we know are there and how the digging of the tunnel has disturbed what’s there is outrageous.”

“To dig a tunnel in such a sensitive area without any oversight, inspection or access to the public is insane,” Kahn added. “They had no right to do so, to begin with.”

According to a statement by Regavim last year, their “investigation revealed that along the path of the tunnel, underground rooms contain ancient artifacts, and the tunnel itself encroaches to a significant extent on public property.”

Watch: The Church’s secret tunnel hidden by the Jerusalem Municipality

There are many questions about why the Vatican secretly constructed a tunnel through a plot of land known for ancient artifacts. Perhaps the tunnel’s true intent is not for transportation, but rather church officials were searching for something…