The Black Sea Grain Initiative was initially agreed upon in July and ended a five-month Russian blockade of Ukraine’s seaports, allowing millions of tons of farm goods to leave Ukraine — a major ag exporter to the world — to countries across Asia, Europe, and Africa.

“I welcome the agreement by all parties to continue the Black Sea Grain Initiative, “UN Secretary-General Antonio Guterres said in a statement, while Ukraine’s President Volodymyr Zelensky tweeted that Guterres and Turkish President Recep Tayyip Erdogan worked together to extend the deal. He added: “waiting for an official announcement from partners.”

Grain Deal will be prolonged for 120 days. 🇺🇦 together with @antonioguterres and @RTErdogan made key decision in the global fight against the food crisis. Waiting for official announcement from partners – 🇹🇷 and 🇺🇳.

There was no comment from Moscow, and Russian state-run media Tass said discussions continued.

Last month, Russia suspended its participation in the deal after a swarm of drones targeted at least one Russian warship from the Black Sea navy. Only days later, Moscow rejoined the agreement to allow for the continued export of Ukrainian grain through the Black Sea ‘safety corridor’. 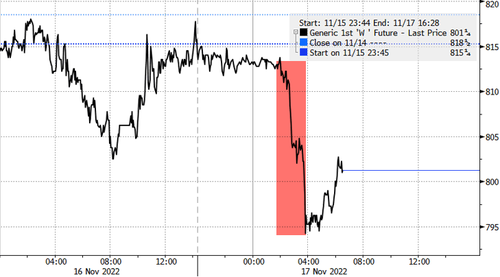 In mid-Oct., Moscow had “repeatedly” voiced concern about the deal because its implementation presented Russian exporters with challenges to sell farm goods and fertilizer into global markets.

The UN said it’s “fully committed to removing the remaining obstacles to exporting food and fertilizers from the Russian Federation.”

There are still mounting concerns that an ongoing global food crisis could worsen in 2023 and cause continued havoc for emerging market economies.