Packing up a whole capital and moving it to a new location might seem like a daunting task, but, as Statista’s Katharina Buchholz details below, some countries have actually tackled the undertaking in the past and one more is planning a move for the future.

A recent change of capital was the move of the German government and administration from Western city Bonn to Berlin upon Reunification in 1991. The vote that made the city Germany’s capital once again was finalized on June 20 – exactly 30 years ago on Sunday.

Political restructuring has, however, not been the most common reason for capital moves in the past.

More cases exist where countries set out to create a neutral city, often a purpose-built capital, either as a vanity project, to bring development to an underserved region or to minimize conflict between cities vying for the position of capital. Prominent examples are the creation of the United State’s capital Washington D.C. in 1790 or Brazil’s capital Brasilia in the 1960s. Kazakhstan’s new capital Astana and Myanmar’s Naypyidaw are more recent manifestations of the phenomenon occurring in dictatorships, where little public oversight, a penchant for being flashy and a fear of attacks has created the right environment for capital moves. While fear of Russian expansionism is rumored to be one of the reasons the Kazakh capital was moved closer to the border (to deter an invasion), the reasoning of the notoriously secretive Burmese junta is not completely understood in international circles. The African continent has also seen two moves to purpose-built capitals – in Nigeria and Tanzania – while a third one in Cote D’Ivoire is considered incomplete by the U.N.

Another curious case of a capital move upon a change of political systems is the independence of Botswana in 1964. Previously, a city named Mafeking had served as the capital of the Bechuanaland Protectorate, which predated Botswana. Astonishingly, due to a back and forth of colonial powers, the city was located outside the old protectorate and new state, prompting the move to Garborone.

Likewise, only one change of capital has taken place around the world because of environmental issues, but that could soon change. In 1970, Belize’s new capital Belmopan was created after a hurricane majorly ravished then-capital Belize City. At least partially owed to environmental trouble, Indonesia has announced that it will move its capital from Jakarta to a new purpose-build location in the region of East Kalimantan on the island of Borneo by 2024. 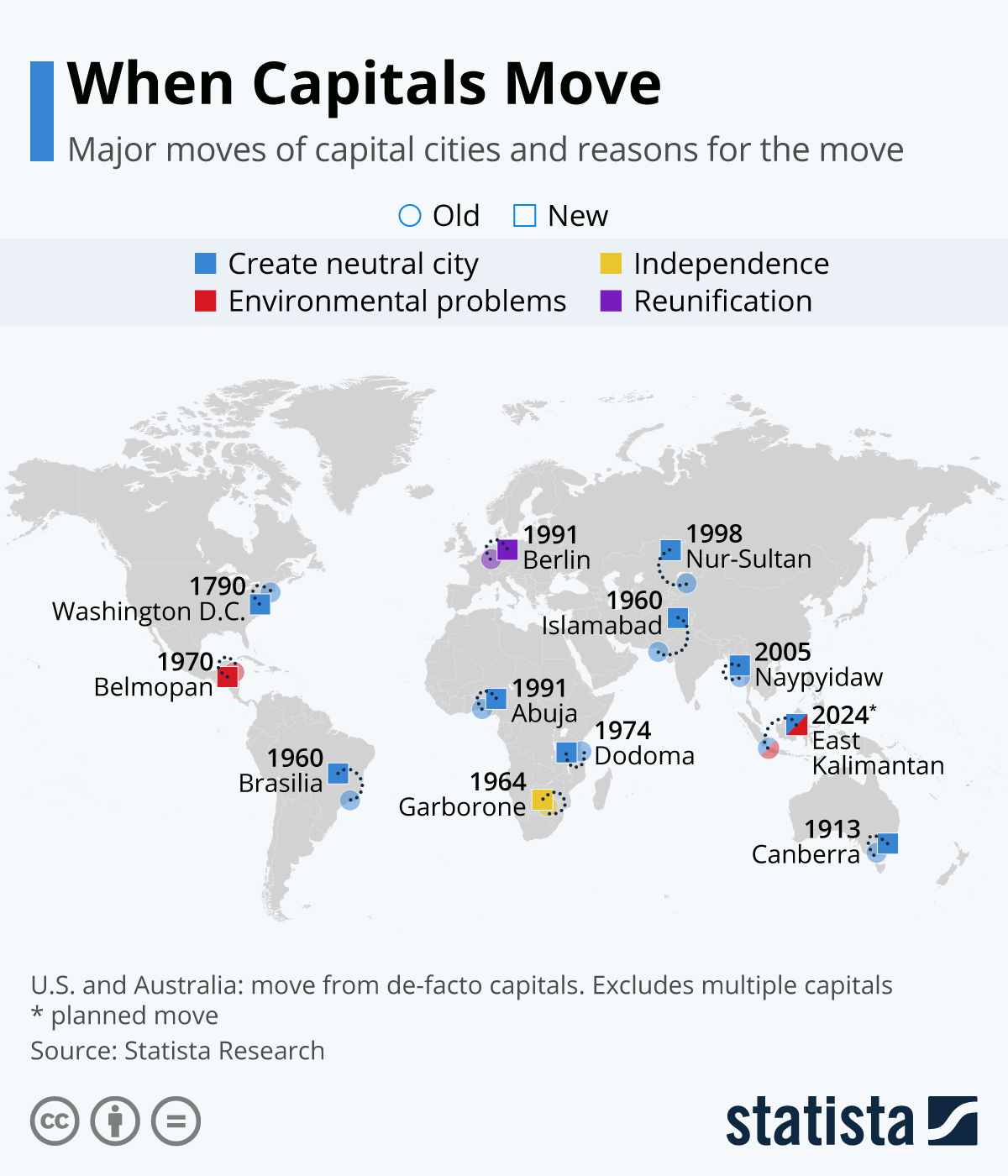 The Indonesian leadership has cited the intent to help another region structurally the reason for the move, but observers also see burdens from pollution and overcrowding. Jakarta is also one of the fastest sinking cities on Earth due to its location below sea level and the excessive extraction of ground water.