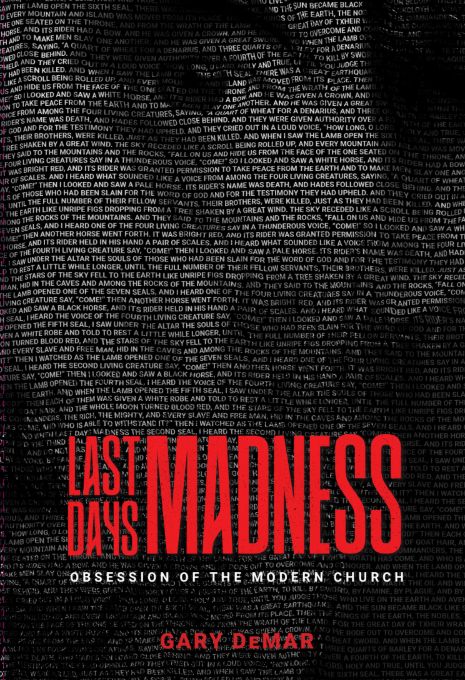 The following article, When Did Jesus 'Come on the Clouds of Heaven'?, was first published on The American Vision.

This is the fourth and final installment in this series (Part 1, Part 2, Part 3).

In Luke 21:20 we find a similar audience reference: “When you see Jerusalem surrounded by armies, then know that her desolation is at hand.” Many prophecy writers who claim that Matthew 24 is about a yet future coming argue that Luke 21:5–24 describes the judgment on Jerusalem that took place in AD 70. Darrell L. Bock, a premillennialist, is a good contemporary example of this position when he writes, Luke “focuses  on the nearer fulfillment in the judgment pattern described here, the fall of Jerusalem in A.D. 70, rather than the end (which he will introduce directly in 21:25).” [1] Many of the people in Jesus’ audience would have been dead by AD 70 and yet Bock has no problem with Jesus using the second person plural. As we’ve seen, it’s a non-issue and does nothing to affect the near fulfillment (“this generation”) of the prophecy.

Dispensationalists in general take a similar position. For example, Arno C. Gaebelein: “This great prophecy was fulfilled in the year 70 A.D., when the Romans besieged Jerusalem and a million perished, besides 100,000 who were made slaves. It is one of the most awful pages in human history. So has Luke 21:24 been fulfilled.”

Last Days Madness is a comprehensive study of Bible prophecy comparing Scripture with Scripture while interacting with other prophecy positions. LDM is a perennial bestseller that has helped many Christians understand the Bible better.

I have not found anything that tells me how Hollett interprets Luke 21:20. I did find the following from Mike Coldagelli’s online article “Luke 21:20-24 Fulfilled or Future?,” an interpretation supported by the debate moderator Alan E. Kurschner or holds to a pre-wrath position:

“Then let those who are in Judea flee to the mountains.” This wording is identical in all three synoptic gospels. The command flows from a condition that can be seen and understood as a sign. Remember, the questions in all three gospels ask for a sign. All three gospels mention pregnant women, nursing infants, and great distress/tribulation. What is the possibility that these four ideas were applied equally in two different discourses to two different events separated by almost 2,000 years? These four parallels in themselves make a strong case that the discourses in Matthew 24, Mark 13, and Luke 21 are the same.

Coldagelli’s position is not common among many premillennialists. For example, non-dispensational premillennialist J. Oliver Buswell, who held a mid-tribulation view of the rapture, taught that “the Olivet discourse predicts two destructions of Jerusalem: an immediate one which occurred in AD 70 by Titus (Luke 13:34–35; 19:43–44; 21:20), and a distant one which will usher in the parousia (cf. Zech 12:2; 14:1–9; Revelation 19)…. [He] saw the prediction of the AD 70 destruction of Jerusalem only in Luke, and not in Matthew and Mark” [2] as he makes clear in his systematic theology:

Luke’s statements that in connection with a particular future destruction of Jerusalem the enemy would surround it with armies (Luke 21:20) and would build a wall around it (Luke 19:43) were so very specifically fulfilled in the destruction of the city by Titus in A.D. 70 that double fulfillment is impossible. [3]

I and other preterists take the position that Matthew, Mark, and Luke are describing the same events leading up to and including the destruction of Jerusalem before that generation passed away. The accounts are different in several ways similar to the birth narratives in Matthew and Luke and refer to the same period of time. “In all probability,” Craig Blomberg writes, “Jesus originally uttered one connected, coherent eschatological discourse from which the three Synoptists [Matthew, Mark, and Luke] have chosen to reproduce different portions in different places.” [4]

How does Hollett get around all of these arguments? Here’s his comment which does not answer any of the issues I’ve raised:

By the way, this force-fitting of Matthew 24:25 [sic] would require the apostles to have been in Jerusalem at the time of the final assault by Titus. Many of them had already died or were evangelizing from afar! Similarly, the elders of the Sanhedrin were dead before AD 70 but DeMar’s view requires them (“you”) to have been alive (cf. Matt. 26:64)!

The simplest answer to this argument is that the use of the second person plural refers to those of “this generation,” that is, the generation that would see the events described by Jesus, the “you” of Matthew 24:33, not only those who first heard Jesus’ response to the disciples’ questions. Some of those in His immediate audience were most likely alive (Matt. 16:27–28) and living in Jerusalem since Jesus was addressing His “disciples.” This could have included some of the 70 and even some among the “multitudes” who followed His ministry. This is a much better solution than reinterpreting “when you see” to mean “when they see,” requiring a temple to be rebuilt, redefining “this generation” to mean any number of things, from this race, this nation, to the generation that sees these signs (but see Matt. 24:33), this type of generation, this offspring, this spiritual generation, and who knows what else rather than what “this generation” means elsewhere in the gospels.

Hollett might object because in Mark’s version of the Olivet Discourse we learn that “Peter and James and John and Andrew were questioning Him privately” (13:3). The questioning may have been in private but the discourse itself could easily have been given to a larger crowd. Jesus often taught in the temple and “would go out and spend the night on the mount that is called Olivet. And all the people would get up early in the morning to come to Him in the temple to listen to Him” (Luke 21:37–38). There may have been a contingent of believers who followed Him. This might explain the questions asked by the four apostles privately.

Luke’s version does not limit the audience to the four: “And while some were talking about the temple … Jesus said, ‘As for these things which you are looking at, the days will come in which there will not be left one stone upon another which will not be torn down’” (21:5–6). Jesus then makes His prophetic pronouncement that concludes with, “Truly I say to you, this generation will not pass away until all things take place” (21:32).

Wars and Rumors of Wars is a verse-by-verse study of Matthew 24 and parts of Matthew 23. Any objection that Brock Hollett might raise on this topic is answered in this helpful book.

What should we make of this comment from Hollett?: “the elders of the Sanhedrin were dead before AD 70 but DeMar’s view requires them (‘you’) to have been alive (cf. Matt. 26:64)!” Why would Jesus have used “you” if He did not mean them? Once again, Hollett doesn’t have a convincing argument for the generic use of the second person plural here. Caiaphas certainly understood what Jesus meant (26:65).

Who was present during Jesus’ interrogation by Caiaphas? The chief priests, scribes, and elders that made up “the whole council” (26:59). There were many people there who could have been alive nearly 40 years later. But 26:64 is not describing events of AD 70 but what was going to come to pass soon—“from now on.” R.T. France explains the timing factor in his commentary on Matthew 26:64:

Coming on the clouds of heaven (together with the phrase “the Son of man”) is a clear allusion to Daniel 7:13, already similarly alluded to in [Matt] 24:30…. We have seen that its natural application in terms of its Old Testament source is to the vindication and enthronement of the Son of man in heaven, not to a descent to earth. It is therefore in this verse a parallel expression to “seated at the right hand of Power”; the two phrases refer to the same exalted state, not to two successive situations or events. In this verse the appropriateness of this interpretation is underlined by the fact that this is to be true “from now on” (hereafter is a quite misleading rendering of the more specific phrase ap’ arti, which, as in 23:39 and 26:29, denotes a new period beginning from now). Indeed it is something which Jesus’ inquisitors themselves will see (an echo of Zc. 12:10, as in 24:30?), for it will quickly become apparent in the events of even the next few weeks (not to mention the subsequent growth of the church) that the “blasphemer” they thought they had disposed of is in fact now in the position of supreme authority. [5]

N.T. Wright offers a similar interpretation in his commentary on Matthew 26:64 that references Daniel 7:13: “The Daniel text … has nothing to do with a figure ‘coming’ from heaven to earth. Despite the widespread opinion that this is what it ‘must’ mean in the gospels, there is no reason to suppose that on the lips of Jesus, or in the understanding of the earliest traditions, it meant anything other than vindication.” Anyone familiar with Old Testament language would have understood what Jesus was saying. Jesus’ enemies certainly did.

Wright continues to explain that the passage “speaks of exaltation: of one who, representing ‘the people of the saints of the most high’, is raised up from suffering at the hands of the beasts and given a throne to sit on, exercising royal power… Jesus is not … suggesting that Caiaphas will witness the end of the space-time order. Nor will he look out of the window one day and observe a human figure flying downwards on a cloud. It is absurd to imagine either Jesus, or Mark, or anyone in between, supposing the words to mean that.” [6]

The following is found in the Expositor’s Commentary on Matthew 26:64: “[T]he time is coming,” Caiaphas and the Council, “when you and I shall change places; I then the Judge, you the prisoners at the bar.”

Continue reading When Did Jesus 'Come on the Clouds of Heaven'? …