Which Companies Are Most At Risk From Surging Yields: Goldman Answers

For those living under a rock in 2021, the big story in the past month is that 10-year Treasury yield have climbed by 50 bps in a month to 1.5% (technically as high as 1.61% for a few brief seconds on Thursday after the catastrophic 7Y auction triggered stop loss selling) as real rates jumped following a steady increase in inflation expectations (breakevens), which however are largely set by 10Y TIPS whose price is determined largely by the Fed due to its massive ongoing monetization of TIPS (thus crushing any actual signaling power TIPS may have). Whatever the cause, while rising breakeven inflation has driven most of the rise in yields during the past six months, the last two weeks have been characterized by a 40 bp jump in real yields.

It’s this sudden spike in real yields as opposed to breakevens, that has sparked much of the fear in markets in the past week, because as Goldman’s David Kostin explains in his Sunday Start note, “conceptually, and historically, equities digest rising inflation expectations more easily than rising real yields” and not just rising real yields, but a rapid spike the likes of which were last observed during the taper tantrum as we discussed two weeks ago in “Yields Soar, Sending 30Y Real Rates Positive Amid Overheating Panic: What Happens Next“). In any case, as a result of the violent moves in the rates complex, it is hardly a surprise that Kostin writes “the recent backup in rates has sparked a new wave of client concern.”

Here are the three things Goldman clients are most concerned about, as well as Goldman’s answer:

Predictably, Goldman’s answer is an emphatic “no” with Kostin claiming (with a straight face) that “although the S&P 500 forward P/E multiple of 22x currently ranks in the 99th historical percentile since 1976, ranking only behind the peak of the Tech Bubble in 2000, our dividend discount model (DDM) implies an equity risk premium (ERP) that ranks in the 28th percentile, 70 bp above the historical average.” In other words, massively, record stretched PE multiples won’t collapse if rates rise. Yeah, right. May want to Timestamp that David. We’ll check back in a few weeks. So what would cause a market crash according to Goldman’s head market cheerleader? Well, according to Kostin, “keeping the current P/E constant, the 10-year yield would have to reach 2.1% to bring the yield gap to the historical median of 250 bp. If instead the yield gap remains unchanged, and rates rise to 2.0%, then the P/E multiple would fall by 10% to 20x.” But don’t worry, Kostin adds, because “in today’s economic environment, our macro model suggests the ERP should be narrower than average.” Translation: yes, a 10% drop is coming but our models say it may not come, so just keep buying.

Addressing the second most regular pushback against its bizarre optimism, Goldman says that an environment of accelerating economic growth (and recall that recently Goldman found that the US Economy is Growing At the Fastest Pace On Record), and higher bond yields is consistent with the bank’s forecast that S&P 500 EPS in 2021 will grow by 27% and be 10% higher than pre-pandemic 2019, driving a 14% rise this year to our year-end price target of 4300 despite a flat P/E multiple. In other words, multiples may indeed contract but the rise in earnings – a result of economic growth – will offset much if not all of the move. Furthermore, the forward market implies that 10-year nominal yields will climb 25 bp further to 1.7% – below Goldman’s 2.1% redline – and real yields will climb by a similar amount to from -0.7% to -0.4% by year-end.

As the Goldman strategist concedes, equities have generated an average return of nearly +1% per month, but the return has averaged -1% during months when nominal rates rose by more than two standard deviations and -5% when real yields rose by that amount. Today, a two standard deviation monthly rise in 10-year rates equates to 40 bp for nominal yields and 30 bp for real yields, both thresholds exceeded this week.

Of course, it’s not just absolute levels across risk that are impacted by rates: Kostin also notes that “shifting interest rates have major implications for rotations within the equity market, a dynamic made clear in recent weeks.” In mid-2020, Kostin’s equity valuation model showed that equity duration –the expectations of earnings growth far in the future –had become a more important contributor to multiples than ever before. One key reason for the importance that investors ascribed to expected future growth was the extremely low level of interest rates. As rates have risen, the contribution of equity duration to stock valuations has declined while near-term growth profiles have become more important. Practically, this means that both the improving growth outlook and rising rates have supported the outperformance of cyclicals and value stocks relative to stocks with the highest long-term growth. Hardly surprising, in recent weeks Goldman’s S&P 500 Growth factor has declined by 9%, similar to the 12% decline around the announcement of Pfizer-BioNTech vaccine efficacy in November

Which brings us to the one sector most at risk from the continued risk in yields.

As Kostin writes, “this rotation has also weighed on one of the most spectacular outperformers of the last 12 months: Stocks with negative earnings but strong expected growth.” One of the most remarkable moves of the past year is that a basket of non-profitable tech stocks soared by 204% last year and 27% in the first six weeks of 2021… before falling by 15% in last two weeks. The decline of these high-growth firms has been particularly painful given the current record degree of leverage carried by hedge funds and the elevated activity of retail traders, both of whom have recently favored some of these long-duration stocks.

To be sure, while earnings for S&P 500 firms declined by 13% in 2020, the fall in aggregate profits does not capture the wide dispersion in operating results that occurred inside the market. While 2020 EPS growth was negative for the overall index and the median stock, the actual level of profits was positive… But not for every company.  In fact, 1082 firms or 37% of the constituents in the Russell 3000 posted negative net income in 2020 (i.e., a loss or negative EPS), and 21% posted negative EBITDA.

Getting even more granular (and apologizing to George Orwell), Kostin then notes that all companies with losses are equal, but some are more equal than others. Some firms reported negative earnings in 2020 because the pandemic and economic shutdown disrupted their business and crushed their revenues. But in other instances, the Goldman strategist points out that “companies grew sales so rapidly that top-line was the focus of investors and bottom-line losses were ignored.” Indeed, consider that across all non-Financial US stocks with at least $50 million in revenues, “those with negative earnings and declining revenues in 2020 returned a median of -18% last year. In contrast, stocks with negative earnings and growing revenues returned +51%.”

Recently, however, improving economic growth prospects from vaccination rollout and pending fiscal stimulus coupled with rising rates have moved firms that struggled most in 2020 into pole position so far in 2021. The cyclical and virus-affected firms with negative earnings and falling sales in 2020 have generated a median YTD return of +22%, outperforming the +10% return of the median stock that posted a loss but grew sales last year. Unsurprisingly, these cyclical stocks have been positively correlated with both nominal and real interest rates. In contrast, the ultra long-duration stocks have been negatively correlated with interest rates given they generate no earnings today and their valuations depend entirely on future growth prospects. Cyclicals also carry far lower valuations, with a median EV/2022 sales ratio of 2x vs. 6x for the median negative earner with positive sales growth.

Putting it all together, Kostin concludes that “looking forward, investors must balance the appeal of promising businesses with the risk that rates rise further and the recent rotation continues.” The list of non-profitable companies that makes up GOldman’s Non-Profitable Tech basket is shown below: 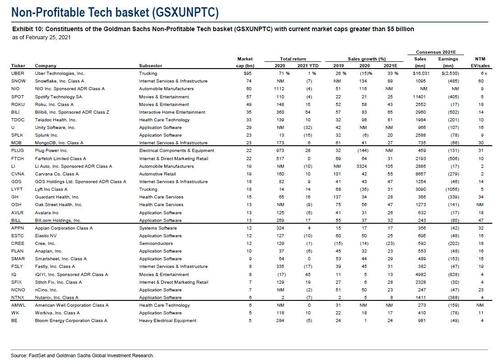 And although secular growth stocks may remain the most appealing investments on a long-term horizon, Goldman believes that those stocks will underperform more cyclical firms in the short-term if economic acceleration and inflation continue to lift interest rates.

Which brings us to the other side of the table: the chart below shows the Russell 1000 firms from each sector with the shortest implied equity durations that have outperformed sector peers during the past two weeks as rates rose and are expected to grow revenues in 2021. The median stock trades at a P/E ratio of 19x and has returned 7% YTD compared with 22x and 2% for the Russell 1000 median. 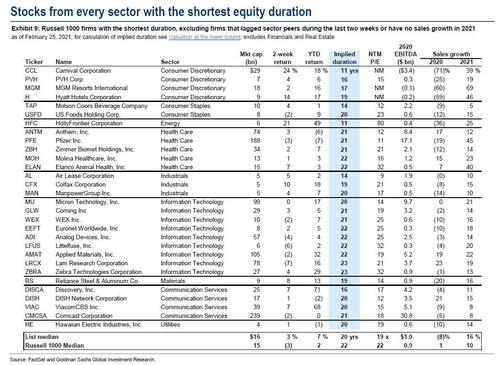