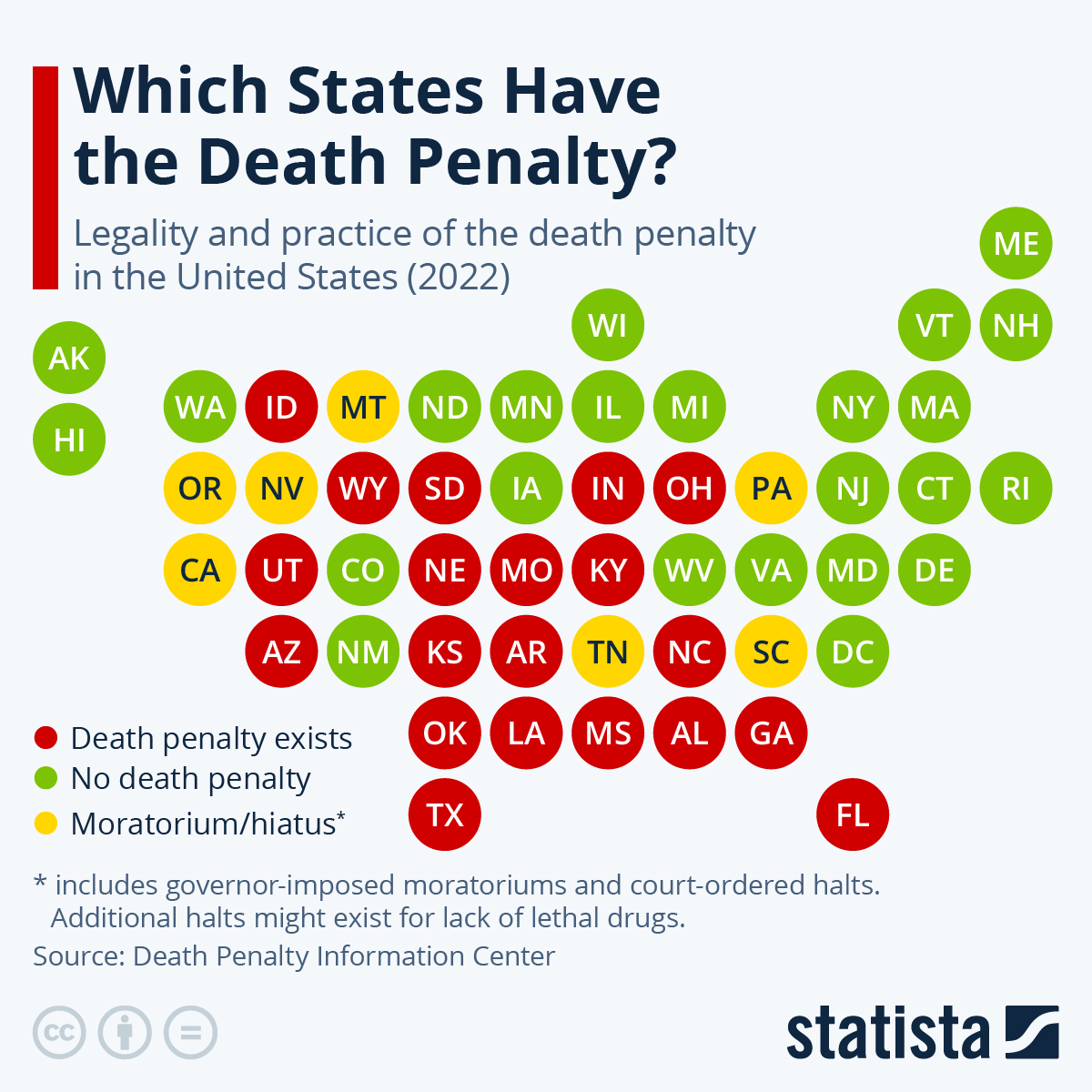 Which States Have The Death Penalty?

According to the Death Penalty Information Center, capital punishment is on the books in 27 states but several don’t actually carry it out. As Statista’s Katharina Buchholz details below, in seven states, governors or courts have officially halted executions. While governor-imposed moratoriums are in place in Oregon, California and Pennsylvania, judges have halted executions in Nevada, Montana, Tennessee and South Carolina, mostly in response to controversy around new drugs used in executions by injection. In the case of South Carolina, the state even reauthorized the use of the electric chair and the firing squad in response to growing scrutiny by pharmaceutical companies and the public around how execution drugs are sourced and used. The change has now being challenged in court while executions are on hold.

Since 2011, the EU has severely restricted exports of the key component of U.S. drug cocktails for executions. In 2016, Pfizer was the last FDA-approved pharmaceutical company to stop selling its drugs for use in the death penalty. As a result, states started to use alternative drugs and sources. Botched executions – for example in Alabama, Ohio, Oklahoma and Arizona using the drug midazolam – received scrutiny and led to court cases.

Execution halts were recently lifted in Kentucky, which passed a new law excluding the severely mentally ill from the death penalty, and Indiana, where a court case concluded that the state has to release data on its use of lethal drugs. While this technically allows Indiana executions to resume, it makes sourcing new drugs for executions almost impossible for the state. Many other states face the same problem in carrying out the death penalty by injection.

Out of the remaining 20 states, another eight have not carried out an execution in at least ten years, either because of a lack of death row inmates, a lack of suitable drugs are a combination of the two. Alabama, Arizona, Missouri, Oklahoma and Texas have all executed prisoners in 2022, while the last execution in Mississippi took place in 2021.

Colorado in 2020 was the latest state that abolished capital punishment, following New Hampshire, which axed its law in 2019.

States carry out most executions in the United States, even though their numbers have fallen recently from a high of 98 in 1999 to just 11 in 2021. Federal executions remain exceptionally rare despite several that were carried out in the twilight of the Trump presidency.