Authored by John and Nisha Whitehead via The Rutherford Institute,

“That was when they suspended the Constitution. They said it would be temporary.”

If there is one point on which there should be no political parsing, no legal jockeying, and no disagreement, it is this: for anyone to advocate terminating or suspending the Constitution is tantamount to a declaration of war against the founding principles of our representative government and the rule of law. 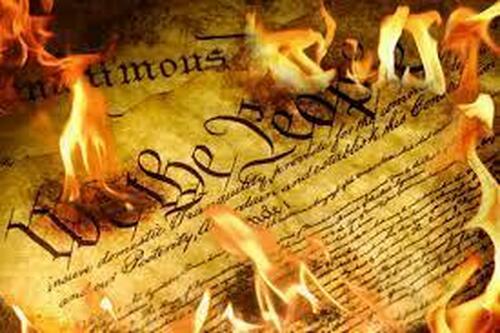 Then again, one could well make the case that the Constitution has already been terminated after years on life support, given the extent to which the safeguards enshrined in the Bill of Rights—adopted 231 years ago as a means of protecting the people against government overreach and abuse—have been steadily chipped away at, undermined, eroded, whittled down, and generally discarded with the support of Congress, the White House, and the courts.

Unfortunately, we have done this to ourselves.

We allowed ourselves to be seduced by the false siren song of politicians promising safety in exchange for relinquished freedom. We placed our trust in political saviors and failed to ask questions to hold our representatives accountable to abiding by the Constitution. We looked the other way and made excuses while the government amassed an amazing amount of power over us, and backed up that power-grab with a terrifying amount of military might and weaponry, and got the courts to sanction their actions every step of the way. We chose to let partisan politics divide us and turn us into easy targets for the government’s oppression.

Mind you, the powers-that-be want us to be censored, silenced, muzzled, gagged, zoned out, caged in and shut down. They want our speech and activities monitored for any sign of “extremist” activity. They want us to be estranged from each other and kept at a distance from those who are supposed to represent us. They want taxation without representation. They want a government without the consent of the governed.

They want the Constitution terminated.

“We” may have contributed to our downfall through our inaction and gullibility, but we are also the only hope for a free future.

After all, the Constitution begins with those three beautiful words, “We the people.” Those three words were intended as a reminder to future generations that there is no government without us—our sheer numbers, our muscle, our economy, our physical presence in this land.

As I make clear in my book Battlefield America: The War on the American People and in its fictional counterpart The Erik Blair Diaries, when we forget that, when we allow the “Me” of a self-absorbed, narcissistic, politically polarizing culture to override our civic duties as citizens to collectively stand up to tyranny and make the government play by the rules of the Constitution, there can be no surprise when tyranny rises and freedom falls

Remember, there is power in numbers.

There are 332 million of us in this country. Imagine what we could accomplish if we actually worked together, presented a united front, and spoke with one voice?