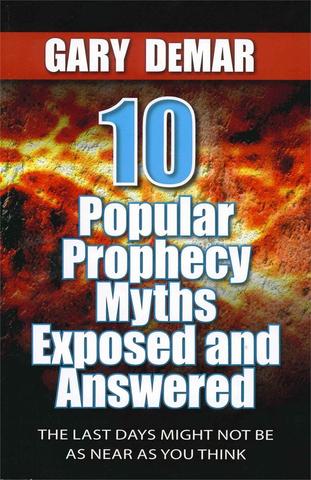 The following article, Who Is Defending Classic Dispensationalism Today?, was first published on The American Vision.

Eschatology is the study of the “last things.” The more popular terminology is “Bible prophecy.” There are numerous schools of thought on the subject. The most popular version—dispensational premillennialism—teaches that particular prophetic events are on the horizon, that a “rapture” of the Church precedes a seven-year period that includes the rise of an antichrist, a rebuilt temple, and a Great Tribulation.

One of the distinct features of this view is the belief that there is an Israel-Church distinction, and because of this distinction God has two redemptive programs. Over the years I have received numerous questions and not a few criticisms of my views. I have tried to answer all who have taken the time to write. Some have been gracious in their replies, and some have not. Many have abandoned their dispensational belief system after reading my published works, some have not. After being engaged in this type of work for more than 40 years, I find that there are people who are unwilling to put their prophetic system to the test. For example:

[Gary DeMar] is a self-labeled non-dispensationalist. While that isn’t a crime or even a theological faux pax, it IS specious, considering that verse which describes ‘don’t boast against the branches, for they [Israel] support YOU’ and not vice versa. Included in that camp is Hank Hanegraaff, who can only be accused of believing one thing years ago and now believes the exact opposite today. Understanding the debate over Replacement Theology [that the Church has replaced Israel in God’s economy] is THE topic today and divides the Body like abortion did 20 yrs ago. [1]

Claiming that a debate over “Replacement Theology” is comparable to abortion is absurd, especially when my critic’s own prophetic system envisions “the worst bloodbath in Jewish history.” [2]

Maybe the topic is like abortion since dispensationalists teach that after the “rapture,” “two-thirds of the Jewish people [living in Israel during the Great Tribulation] will be exterminated.” [3]

Jews made up the New Testament ekklesia (Acts 5:11; 8:1–3). Again, this wasn’t anything new. The ekklesia (the KJV translates it as “church”) was “in the wilderness” (7:38; Heb. 2:12). Gentiles were grafted into an already existing Jewish ekklesia.

God always intended that the promises made to Israel would extend to include the nations (Acts 10; 13:47–48; 26:23). This is not to assume that every Israelite and non-Israelite would be saved. It’s about the remnant (Rom. 9:6–8, 27; 11:5) not natural descent (John 1:12–13). I deal with this and related topics extensively in my book 10 Popular Prophecy Myths Exposed and Answered.

As a result of many failed predictions, many Christians are beginning to take a second look at a prophetic system that they were told is the only one that takes the literal interpretation of the Bible seriously. Gary DeMar has taken on the task of exposing some of the popular myths foisted upon the public by prophetic speculators: The Myth of the Israel-Church Distinction; The Myth that the Modern State of Israel is a Sign that the Rapture is Near; The Myth that Only Dispensationalists Have a Future for Israel; The Myth of the Postponed Abrahamic Covenant; The Myth of Replacement Theology; The Myth that Animal Sacrifices and Circumcision Are Everlasting Rites; The Myth that the Temple Needs to be Rebuilt; and more.

Everyone prior to around 1830 was a non-dispensationalist when compared to the Darby-Scofield-Dallas Seminary definition, so I don’t see how being a “non-dispensationalist” today carries with it such negative connotations. And until the publication of the Scofield Reference Bible in 1909, there was no agreed upon dispensational system among even a minority of Christians. [5] It’s rather surprising that the notes by one man who had no real theological training would end up creating a new prophetic movement where the notes more often than not supplant the text of Scripture.

Since its inception, dispensationalism has been considered biblically aberrational by a number of theological traditions. [6] R. B. Kuiper (1886–1966), who served as a professor at Westminster Theological Seminary and President of Calvin Theological Seminary, wrote in 1936 that two grievous errors were “prevalent among American fundamentalists, Arminianism and the Dispensationalism of the Scofield Bible.” The General Assembly of the Orthodox Presbyterian Church went so far as to describe Arminianism and Dispensationalism as “anti-reformed heresies,” [7] that is, heretical in terms of the theology that came out of the Reformation.

Professor John Murray, who taught Systematic Theology at Westminster Theological Seminary and wrote a commentary on Romans for the New International Commentary Series, wrote that the “‘Dispensationalism’ of which we speak as heterodox from the standpoint of the Reformed Faith is that form of interpretation, widely popular at the present time, which discovers in the several dispensations of God’s redemptive revelation distinct and even contrary principles of divine procedure and thus destroys the unity of God’s dealings with fallen mankind.” [8] Premillennialism of the covenantal or classical variety was not under attack by these men. [9] Kuiper again writes:

It is a matter of common knowledge that there is ever so much more to the dispensationalism of the Scofield Bible than the mere teaching of Premillennialism. Nor do the two stand and fall together. There are premillennarians who have never heard of Scofield’s dispensations. More important than that, there are serious students of God’s Word who hold to the Premillennial return of Christ and emphatically reject Scofield’s system of dispensations as fraught with grave error. [10]

This is not to say that advocates of dispensationalism are not heirs of the Reformation in most respects. Most hold orthodox positions on basic Christian doctrines, but dispensationalism as it was codified by Scofield and is taught and promoted today was unknown in the history of the church.

Dispensationalism has gone through numerous revisions since the publication of the New Scofield Reference Bible in 1967. Thomas Ice, a graduate of Dallas Theological Seminary (DTS) and former professor at Liberty University who serves as professor of Bible and theology and Calvary University, predicted, “By the year 2000 Dallas Theological Seminary will no longer be dispensational. [Professional] priorities are elsewhere than the defense of systematic dispensationalism from external criticism.” [11] DTS is still dispensational but students do not have to subscribe to the statement of faith of the professors.

Dispensationalism is being questioned by the more orthodox charismatics. Dr. Joseph Kickasola, who served as professor of international studies and Hebrew at Regent University observed that there has been a “‘diminishing of dispensationalism,’ especially among charismatics, who, he says, are coming to see that ‘charismatic dispensationalist’ is ‘a contradiction in terms.’” [12] The date-setting element of dispensationalism is losing its fascination with many of its adherents since the fortieth anniversary of Israel’s nationhood (1948–1988) passed without a rapture. Dave Hunt, a proponent of the national regathering of Israel as the time indicator for future prophetic events, writes: “Needless to say, January 1, 1982, saw the defection of large numbers from the pretrib position…. Many who were once excited about the prospects of being caught up to heaven at any moment have become confused and disillusioned by the apparent failure of a generally accepted biblical interpretation they once relied upon.” [13]

Hunt went on to assert: “[Gary] “North’s reference to specific dates is an attack upon the most persuasive factor supporting Lindsey’s rapture scenario: the rebirth of national Israel. This historic event, which is pivotal to dispensationalism’s timing of the rapture, as John F. Walvoord has pointed out, was long anticipated and when it at last occurred seemed to validate that prophetic interpretation.” [14]

Nothing even remotely associated with modern-day dispensationalism can be found in the creedal formulations of the church going back to the Council of Nicaea in AD. 325. Not even non-dispensational (classical) premillennialism was written into the basic Christian creeds. [17] Most of the finest Christian scholars the church has ever produced were not then and are not now dispensationalists. Of course, this does not mean dispensationalism is a false system, but it does mean that it needs to be evaluated in terms of how it compares with Scripture. If the Bible is the standard, then dispensationalism does not have an exegetical leg to stand on.

As far as I know, there has not been a scholarly defense of dispensationalism by a major Christian publishing company for many years. Most new prophecy books are being published by Harvest House written by just a few authors who have not broken any new ground. Their books repeat the same themes with only different book titles.

For more information on the topic of Bible prophecy, check out the following books from American Vision:

Left Behind: Separating Fact from Fiction

The Early Church and the End of the World

The Gog and Magog End-Time Alliance

The End Times and the Islamic Antichrist

The Days of Vengeance: An Exposition of the Book of Revelation