Why Goldman Prefers Ether, JPM Turns Bullish And More: Key Crypto Developments In The Past Week

All those who have followed the writings of JPMorgan’s Nick Panagirtzoglou and Josh Younger, for whom no bitcoin bashing opportunity was too small or too insigificant – a least until last Friday, when Panagirtzoglou finally admitted his bearishness was wrong and that there were “clear signs of rising institutional demand”, sending bitcoin and ether to 3 month highs… 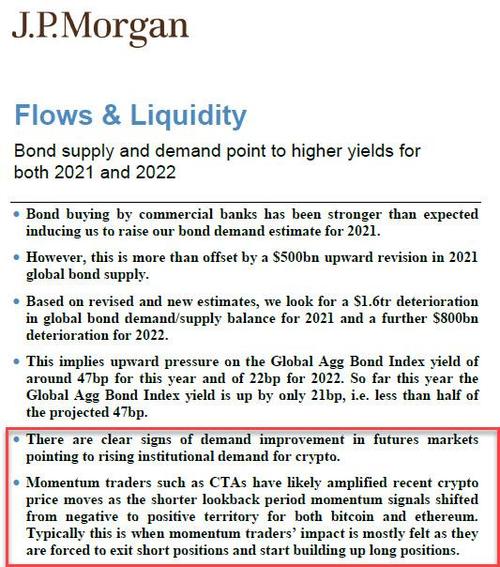 … may be surprised to learn recently the bank has been quietly distributing a report for its clients looking at all the top crypto developments without a negative bias.

So for those tired of listening to JPM’s conflicted musing as it tries to create a lower entry point for its prop traders, here is nothing but facts from the Crypto Weekly report at the world’s largest bank:

There were several notable developments on the regulatory front, where the top event took place on Tuesday, when the US Senate passed the $1T Infrastructure Bill which has provisions for tax reporting requirements for the players in crypto industry. The bill requires crypto ‘brokers’ to report user data including their names & addresses. The bill define ‘broker as anyone ‘responsible for and regularly providing any service effectuating transfers of digital assets on behalf of another person’. This definition of ‘broker’ will include crypto miners and software developers even though many of them do not collect or have access to users’ personal information. The crypto advocates say that this measure could harm crypto innovation happening in US. Treasury has been scrambling to explain to the House that it needs to amend the relevant section.

Finally, over in Japan, Junichi Nakajima, the recently appointed Commissioner of Japan’s Financial Services Agency, said in an interview that he is open-minded about the potential benefits that assets like Bitcoin possess as a quick and cheap way to send cash, however, in Japan, they are mainly being used for speculation and investment He added that they need to consider carefully whether it is necessary to make it easier for the general public to invest in crypto assets. The country’s financial regulator recently set up a study group of outside experts and may put out there regulatory responses to DeFi in the coming months. 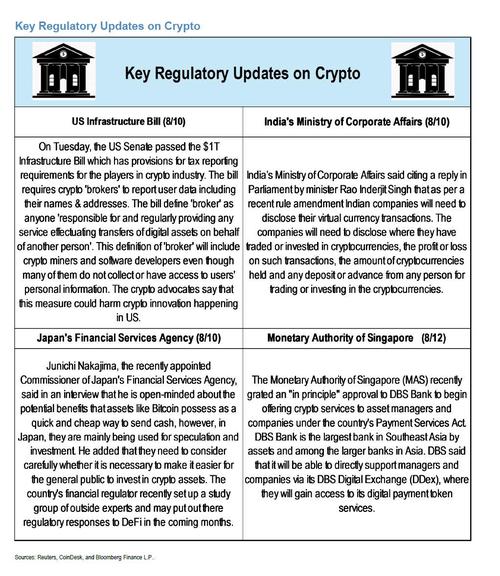 Here is a list of the Key corporate developments in the Week: 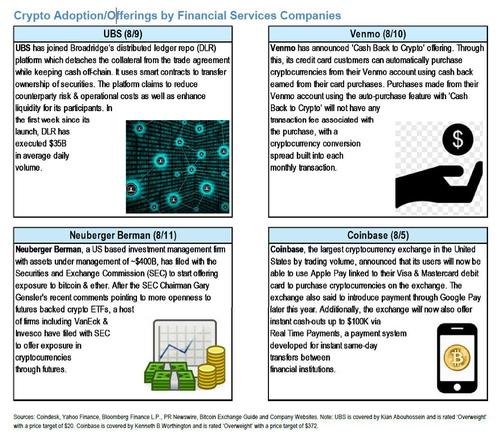 An update on the latest crypto adoption news finds that in addition to AMC accepting bitcoin as payment by year-end, China’s telecom giant Xiaomi unveiled that it is partnering with Utrust to accept payment in various cryptocurrencies in Portugal. Finally, Microstrategy said it would continue buying more bitcoin. As of June-end, the company held 105,195 bitcoin with a book value of $2.1 billion, and while its core non-bitcoin business may be worth around $1 billion (very generously), many are wondering where the additional $4 billion in market value comes from. 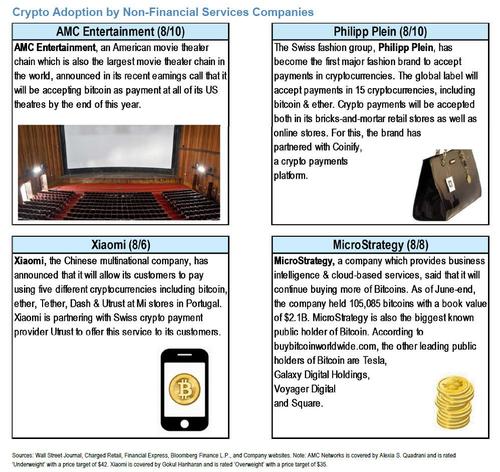 Away from JPMorgan, last week Goldman published its own crypto report authored by chief FX strategist Zach Pandl who reminded clients of Goldman’s view that a “flippening” is coming and that Ethereum – which it dubbed “the Amazon of information” in its initiating coverage report from May – will overtake more than Bitcoin. 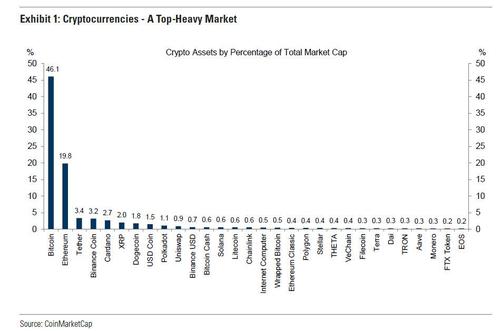 In his note, Pandl writes that like other asset classes, cryptocurrencies show a high degree of co-movement, consistent with a common market “beta”. For example, in data since the end of 2019, the first principal component explains about 80% of the daily variation in prices. However, the market does appear to distinguish between categories as well as specific assets. Based on available benchmark indices, the cryptocurrency market has delivered returns of around 750% since the end of 2019. Returns to individual assets or market segments have often differed from this benchmark return. For example, Goldman notes that Bitcoin has underperformed the broad market, gaining about 500% over this period, while Ethereum has outperformed, appreciating by more than 2,000%. 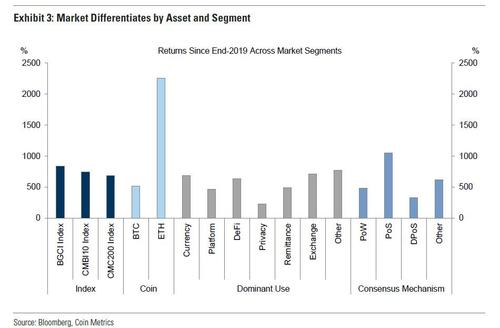 Based on the Coin Metrics’ dominant use categories (and applying equal weights to the individual assets within each segment), exchange tokens, currency-like assets, and those used in other applications outperformed over this period, while privacy-focused assets underperformed. Similarly, networks with consensus mechanisms based on Proof-of-Stake (PoS) have outperformed those based on energy-intensive Proof-of-Work (PoW).

Here Goldman reminds its clients that it recently argued that cryptocurrencies can be considered network technologies, and that valuations should be expected to rise with network growth, at least if driven by non-speculative use cases. Tracking cryptocurrency performance by market segment may also help determine which network features markets are rewarding over time. For example, in the next chart Goldman calculates equally-weighted return series for crypto assets categorized by dominant use, as well as for the market as a whole (using the universe of assets covered by Coin Metrics). The bank then plots the ratio of returns by category to the broad market to measure the degree of outperformance or underperformance by segment.

As shown in the chart below, there have been a few periods of notable performance divergence by use category over the last year. For example, the remittance index outperformed in November on a surge in the price of XRP and Stellar, DeFi-related assets gained more than the broad market in January and early February, while exchange-related tokens have outperformed more recently. 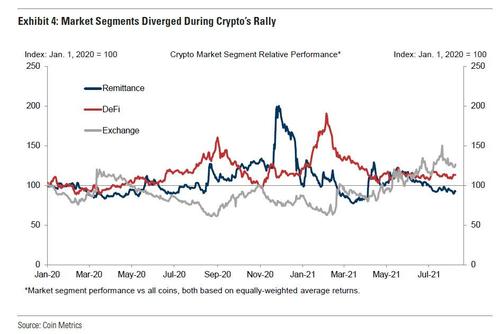 While potentially a useful way to categorize the nascent world of crypto assets, Goldman notes that defining market segments in this way has some drawbacks. For example, in some cases the dominant use categories include fairly dissimilar assets, and narrower groupings may therefore be more appropriate for tracking the performance of crypto market segments. Moreover, the features of particular networks may change over time (e.g. Ethereum plans to shift to a PoS consensus mechanism), which may require moving assets between categories.

And speaking of Goldman’s preference for ethereum, ether traders have been acutely focused on data from the underlying Ethereum blockchain’s recent upgrade, known as the London hard fork – and the potential for the refresh to reduce the cryptocurrency’s supply growth. Under Ethereum Improvement Proposal 1559, a component of the London upgrade that’s usually shorthanded as just EIP 1559, base fees paid to transact on the blockchain get “burned,” meaning they offset some of the 2 ETH created as miner rewards with each data block.

At publication press time, some 48,600 ETH have been burned in accordance with EIP 1559, according to the website Ultrasound Money. The amount represents more than $156 million, and has reduced the net issuance of new ether by an estimated 35%.

The big question, as Coindesk notes, is whether institutional investors who are creeping into digital-asset markets might start to see ether as an inflation-resistant asset, similar to the way many bitcoin bulls have cast that cryptocurrency.  As bitcoin has rallied 16% in August, ether has outperformed with a 26% gain. On a year-to-date basis, ether has quadrupled in price while bitcoin is up 58%. 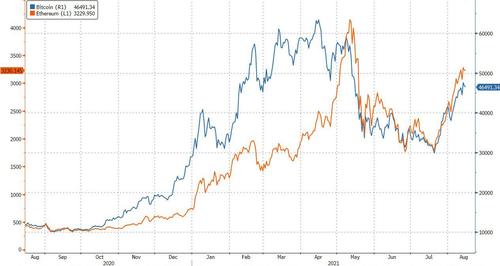 FundStrat, Tom Lee’s investment-research firm, wrote this week: “We expect fees moving through the platform to increase concurrent with the recent uptick in market activity and consequently should continue to see further disinflationary and perhaps even deflationary effects on Ethereum’s circulating supply, resulting in positive price performance.”

It’s notable that Mike McGlone, the Bloomberg Intelligence analyst who won praise for his (ultimately) accurate call last year that bitcoin would hit $50,000, raised the possibility in a report this week that ether might eventually challenge the larger cryptocurrency for the top spot in the rankings of digital assets by market capitalization. Crypto insiders often to that imagined change in the leaderboard as the “flippening.”

“There appears little can stop the process of ethereum ‘flippening’ to take the top spot by market cap, even it takes years rather than months at current trajectories,” McGlone wrote. “Ethereum appears on an enduring path as the go-to platform for the crypto ecosystem and decentralization of finance akin to Amazon Inc. and e-commerce.” 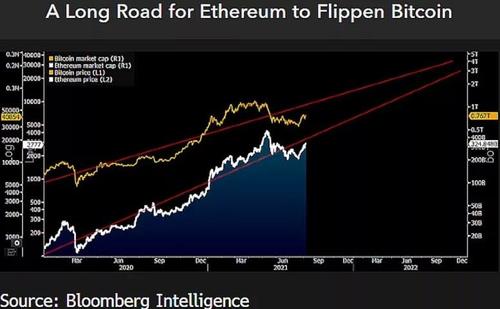 Picking up on the increasingly bitter animosity between the BTC and ETH camps, UBS strategist James Malcolm writes that aside from their practical distinctions, there are several unique price characteristics in the two tokens’ price action: namely, BTC displays markedly lower volatility (Figure 5), which may be a product of its relative maturity and more diverse investor base, including ‘value-players’ who accumulate on dips and sell spikes. This has encouraged some to treat it as a funder within the crypto space. But, as the UBS strategist notes, one needs to be careful as its correlations to stocks have risen structurally and tend to surge during bull runs (Figure 8). Ether exhibits even stronger equity and tech correlations at longer-term horizons, which seems intuitive also even though its sensitivity to the dollar, gold, US Treasuries and inflation proxies do not screen as materially different to bitcoin’s. 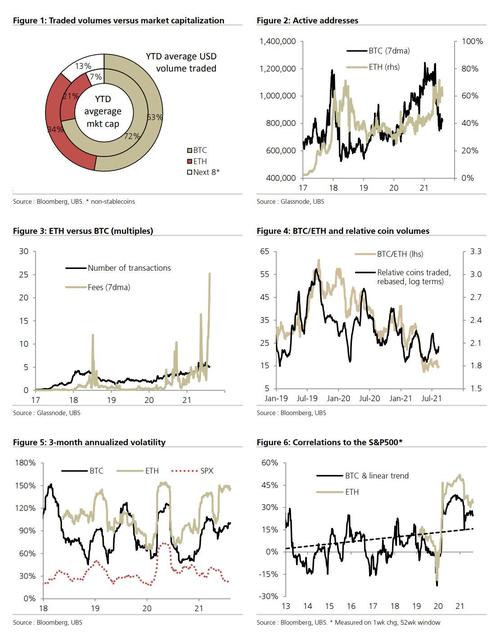 Looking ahead, however, Malcolm concludes that “Charles Darwin observed in the Galapagos nearly two centuries ago that successive slight adaptations are key to the survival of any species in the natural world. Yet he noted that evolution is unpredictable because the environment that shapes it also fluctuates. One should likewise eschew foregone conclusions here.”