2021 has been a blockbuster year for virtually every banking product: from IPOs and equity offerings, to investment grade and junk bond sale and yes – even M&A: according to Goldman, through July 15, some $1.9 trillion of deal value for US-based acquirers has been announced, the highest volume of M&A by this point in the year since at least 2000. 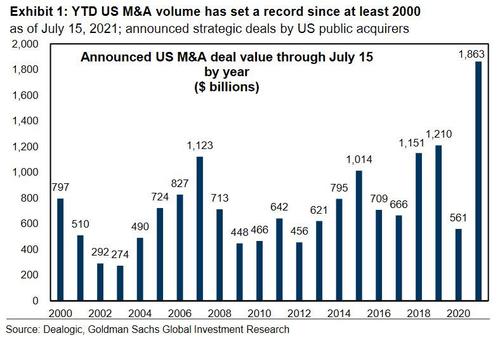 Specifically, among the strategic deals over $100 million that have been announced by US-based acquirers, Tech, Leisure & Recreation, and Telecom firms account for a combined 56% of total deal value. Why? Because thanks to the 2020 depression and subsequent Fed nationalization of the bond market, we saw record debt and equity issuance resulting in trillions in cash new cash. Now, corporate cash balances are among the highest ever and S&P 500 managements are deploying some of the cash on M&A deals.

While there is nobody doubt the M&A market is gripped by epic euphoria, Goldman’s David Kostin observes a curious twist: companies are funding their mergers in an anomalous way compared to history, paying above-average premiums and using less stock consideration than usual given high equity multiples,almost as if they have cash to burn. During the last 20 years, high S&P 500 forward P/E multiples have been associated with greater stock consideration in M&A deals. 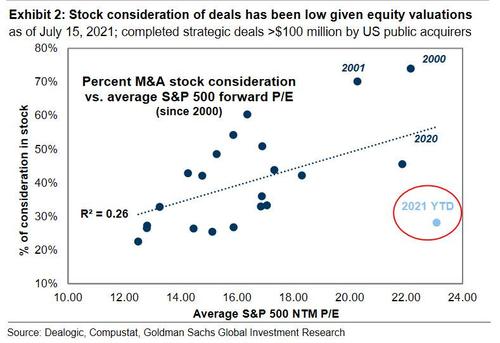 This is intuitive; when equity multiples are high, the acquirer’s stock becomes more valuable in potential transactions. On an absolute basis, the S&P 500 trades at a near record high valuation. However, as shown in the chart above, only 28% of completed deal value (>$100 million) for strategic US acquirers has been in stock consideration vs. the almost 50% that history would imply. Within that universe, deals have also been completed at a larger premium than usual. In the last two decades, the mean deal premium to pre-bid price has been 32%. The average $100+ million deal in 2021 has been struck at a 44% premium to pre-bid price, showing buyers’ appetites to pay a premium for acquisitions post-pandemic.

Looking ahead, there are two possible paths: continued record activity or a regulatory crackdown by the BIden admin.

As Kostin notes, one reason M&A could continue to surge is the $104 billion in equity capital raised YTD across 336 SPAC IPOs, augmenting the $77 billion in SPAC issuance in 2020. Already, 154 de-SPAC mergers have been announced in 2021, absorbing $54 billion of SPAC equity capital and driving $384 billion of deal EV. But the Goldman strategist estimates that there is still $118 billion of cash in 394 SPACs currently searching for a target. On average, the aggregate ratio of target EV at merger announcement to SPAC capital is roughly 7x, implying that SPACs could drive $800 billion of M&A enterprise value during the next two years.

All else equal, Goldman forecasts that S&P 500 companies will spend $324 billion in cash M&A in 2021 (+45% year/year) and $340 billion in 2022 (+5%). The bank recently noted that cash M&A growth is positively correlated with S&P 500 earnings growth, and Goldman forecasts that S&P 500 earnings growth of 35% this year will drive a rebound in cash M&A, supported by the strong backlog of announced deals and record-high cash to asset ratios.

But while Goldman – which makes generous fees on advisory assignments – would love nothing more than continued record M&A activity, storm clouds are gathering. One headwind to the cash component of M&A is elevated equity valuations. On the other hand, the low interest rate environment that has supported equity valuations also makes it easier for companies to issue debt to fund acquisitions with cash.

A bigger concern as Goldman itself admits, and why the bank expects more muted growth in cash M&A in 2022, is due to policy risk, or as Kostin put it: “A key risk to the outlook for M&A is increased regulatory scrutiny due to antitrust concerns. This week, we explored the topic in more detail in our report on antitrust risk in the US stock market (Equities, antitrust, and the “inestimable” value of due process, Jul. 13, 2021).” The bottom line, according to Goldman, is that increased antitrust scrutiny has different implications for key stakeholders in the capital markets ecosystem:

Passive or index investors could also be affected by the new era of antitrust given the companies in the S&P 500 that are most likely to be subject to scrutiny are also the largest constituents in major equity benchmarks.President Biden’s executive order, proposed legislation, and pending lawsuits specifically target “Big Tech” (AAPL, AMZN, FB, and GOOGL). 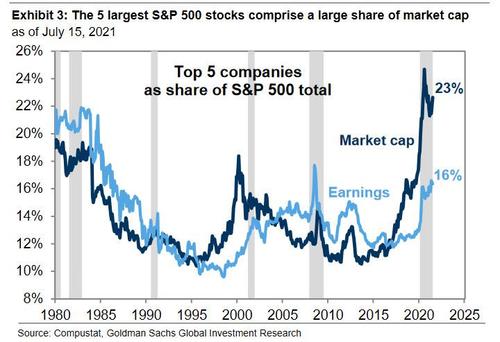 … and Goldman notes that in an increasingly concentrated market, risks to the trajectory of sales growth and profitability of these companies represent risks for the broader market. However, a sum-of-the-parts valuation could be higher or lower than the original company’s valuation and would impact the stock market accordingly if a full break-up were undertaken. In addition to the largest companies, the FTC’s stricter regulatory posture could also indirectly weigh on potential M&A targets.

Goldman concludes by listing its tactical research team’s basket of likely M&A candidates screens for companies that its analysts deem to have at least a 15% likelihood of being acquired. The basket sharply outperformed as the economy reopened, corporate balance sheets improved, and M&A activity picked up. However, since March of this year, the basket has underperformed the market by 7 pp and trades at a valuation discount of 20% vs. the S&P 500. 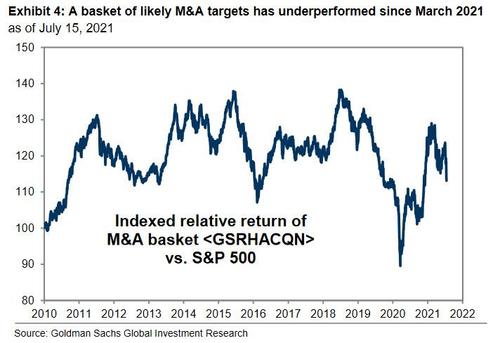 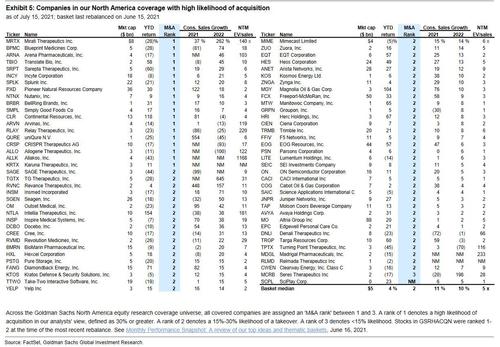 Kostin’s bottom line is rather obvious: “More regulatory scrutiny could represent a persistent overhang to potential M&A targets, particularly in industries with high market concentration. On the other hand, if strategic buyers take a step back from M&A, it could create an opportunity for private equity firms: alternatives have $3.3 trillion in dry powder.”