Just hours ago we noted that Tesla was continuing down a rocky road in China, with some Chinese government agencies re-evaluating whether or not employees would even be allowed to drive Tesla vehicles on their premises.

It was just moments after we published that article that we were reminded of just how supersaturated China’s EV market has truly become. The country now has 846 registered auto manufacturers, according to a note from Bloomberg, who contends that a shakeout is “looming”.

Spurred by incentives offered by Beijing, about 300 of those manufacturers are in the business of making new energy vehicles.

The Chinese government has offered tax breaks, subsidies and land grants to any company with plans of moving into the NEV space, spurring intense competition between names like Hozon, Li Auto, Nio Geely and Xpeng.

Provinces like Zhejiang are spending billions on developing the sector. Zhejiang plans to invest more than $47 billion into the space by 2025. And there has been no doubt that investors are still willing to throw money at EV names. Bloomberg writes:

Shanghai-based electric carmaker Nio — which targets a similar buyer to Tesla — completed its New York initial public offering less than four years after it was started, the shortest timeframe of listed automakers globally, its founder William Li claimed in a speech this month. A surge of investment the past year has seen Nio and others like it, including Evergrande NEV — the automotive arm of China’s most indebted property company, which is yet to make its own car — now valued more than the likes of Renault and Nissan.

With the influx of names comes excess, however. Many of the budding EV companies coming to fruition in China wouldn’t be able to survive without help from the government and are struggling to turn a profit consistently, if at all. The warning signs are there: provinces like Jiangsu are already “sounding the alarm on operating efficiency”, making it clear that the sector is starting to become unavoidably overcrowded. 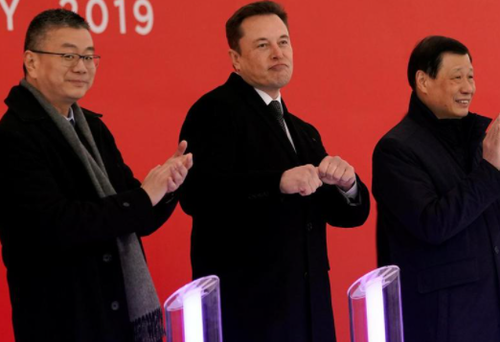 Eventually, the tide is going to go out on these names, leaving only a fraction of the players that are currently jostling for position. We’re guessing that being in favor with the Chinese government is going to be a key factor in the success of many of these companies. As we have documented over the last year, it seems like that favor has deteriorated for Tesla.

Recall, we noted over the weekend that government bodies have been asked to check and report on employees who own Teslas in Zhejiang and Guangxi. Employees are being “forbidden” from driving into certain official areas, due to supposed security risks, the report notes.

Other official Chinese bodies are following suit. The China Meteorological Administration, for example, has already told its employees not to buy Tesla EVs and, if they have already, to transfer ownership of the vehicles. The Propaganda Department of the Chinese Communist Party (yes, this is actually what it is called) is also “checking whether any employees or their family own Teslas.”

Any continued major hiccups in Tesla’s relationship with China could be devastating for the automaker, who relies on the world’s largest auto market to help it redline production to meet Wall Street’s increasingly optimistic expectations.

Which leads to the obvious question: when the “shakeout” does happen in the world’s largest auto market, will Tesla be a survivor?