Oil ended lower on the day at settlement, but staged a big comeback intraday from the plunge triggered by reports of Putin’s peace talks optimism (according to the top Russian negotiator, the talks were “constructive” but they still ended with no agreement whatsoever). U.S. Secretary of State Antony Blinkin expressed skepticism about Russia’s promise to de-escalate its military activities around Kyiv.

Fears over Shanghai’s lockdown and the knock-on effects on demand (could lower oil demand by as much as 200,000 barrels a day for the duration of the restrictions) also weighed on oil prices as WTI tumbled back below $100 briefly intraday before ripping back up to $105 by the close.

“We are still in a $100 environment, no question,” said Paul Sankey of Sankey Research on Bloomberg Television. China’s continuing lockdowns are also relieving some pressure, but markets remain volatile, he said. “China is taking heat out of the market, but if the heat comes back, that adds $10” a barrel.

For now, all eyes on Cushing stocks (rebuilding) and if any demand concerns show up in the inventory data…

Cushing stood out as it flipped back to a draw after two weekly builds in a row, but Crude (bigger than expected) and products all saw inventory draws too… 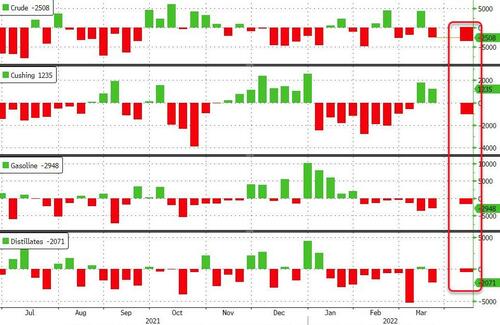 WTI hovered around $105 ahead of the API data and lifted modestly after.,.,. 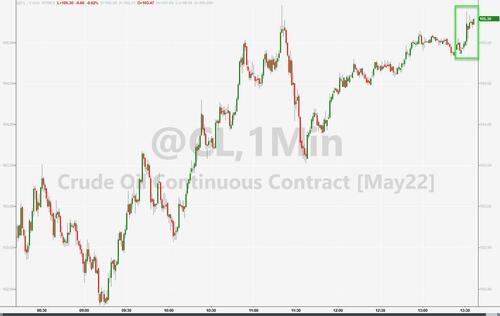 “Fundamental traders and investors have taken their chips off the table in crude due to extremely high volatility, leaving the primary players in the market to be traders looking to hedge geopolitical risks,” said Rebecca Babin,senior energy trader at CIBC Private Wealth Management.