Coming off last week’s Shanghai Cooperation Organization (SCO) in Uzbekistan where the two leaders met, the Australian Strategic Policy Institute observes, “Xi has likely sensed the opportunity to use the Sino-Russian ‘no limits’ partnership to extract greater Russian resources from Putin in exchange for China’s continued backing.”

“Despite his seemingly unimpressed face at the summit, Xi is unlikely to break ties with Putin over the lack of Russian progress in Ukraine. Russia simply remains too important a partner in China’s strategy to challenge the United States’ position in the Indo-Pacific,” the institute’s analysis adds.

And interesting given the timing, Xi on Wednesday – the same day that Putin declared a ‘partial’ national military mobilization – addressed a national military seminar, telling top officers to focus their attention on gearing up for potential military action on the horizon. 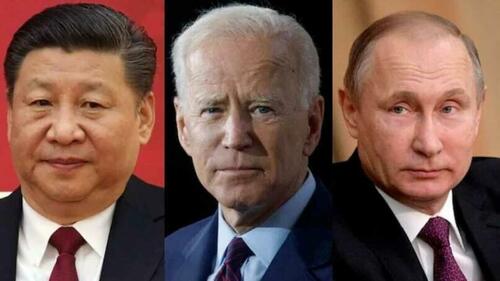 “It is imperative to conscientiously summarize and apply successful experience in reforms, to master new situations and [understand] the requirements of the tasks, to focus on preparing for wars, and to have the courage to explore and innovate,” Xinhua News Agency quoted the Chinse president as saying.

He said further at the Beijing-hosted defense conference, which included high-ranking representatives of China’s Central Military Commission (CMC), as well as the People’s Armed Police Force and military academies, that major reforms to the nations armed forces he initiated starting years ago have been successful.

“Long-standing systemic obstructions, structural incongruities and policy issues in the development of national defense and the armed forces have been resolved,” he told the top defense officials.

The acknowledgement was a surprising indication of friction between the two powers.@vtchakarova breaks down what is at stake for Moscow and Beijing in maintaining their alliance ⤵️ pic.twitter.com/WJ5dHrs76B

Meanwhile, on Tuesday a pair of Western warships make a provocative sail through of the contested Taiwan Strait, at a moment the PLA military continues its heavy patrol presence surrounding Taiwan in the wake of the early August Pelosi visit, as CNN describes:

US and Canadian warships sailed through the Taiwan Strait on Tuesday following weekend remarks from President Joe Biden that the US would defend Taiwan in the event it is attacked by China.

It wasn’t the first time Biden answered with a simple “yes” when pressed on whether the US would defend Taiwan if the island were invaded.

He issued the blunt response when asked in a CBS “60 Minutes” interview which aired Sunday what the US reaction would be if China decided to invade Taiwan. “Yes, if, in fact, there was an unprecedented attack,” he said in a sit-down with CBS’ Scott Pelley. Xi no doubt had such provocative comments from the US commander-in-chief fresh on his mind when he addressed Wednesday’s military conference in Beijing.