Yet Another Scientific Study Concludes COVID Is Likely Lab-Engineered

Another new scientific study has concluded that it is more likely than not that the COVID pandemic originated with a virus engineered inside a lab. 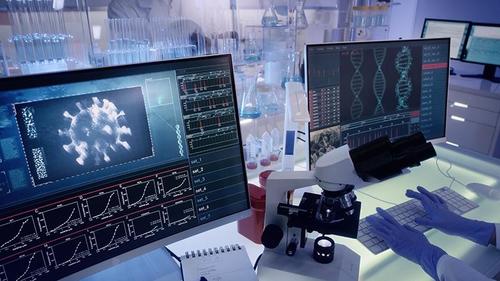 Dr. Stephen Quay and Berkeley physics professor Richard Muller revealed the findings in The Wall Street Journal Sunday, noting that “The most compelling reason to favor the lab leak hypothesis is firmly based in science.”

The scientists added that “COVID-19 has a genetic footprint that has never been observed in a natural coronavirus.”

The research points to the genome sequencing of the virus ‘CGG-CGG’, which is one of 36 sequencing patterns observed, but does not occur in nature.

“A virus simply cannot pick up a sequence from another virus if that sequence isn’t present in any other virus,” they add, while also noting that the CGG-CGG combination IS commonly used in ‘gain of function’ research, which is known to have been used with coronaviruses at the Wuhan Institute of Virology.

The scientists urge that those who believe COVID-19 jumped from animals to humans “must explain why it happened to pick its least favorite combination: CGG-CGG.”

They further ask for an explanation as to “Why did it replicate the choice the lab’s gain-of-function researchers would have made?”

“Yes, it could have happened randomly, through mutations. But do you believe that?” the authors of the study ask, adding “At the minimum, this fact—that the coronavirus, with all its random possibilities, took the rare and unnatural combination used by human researchers—implies that the leading theory for the origin of the coronavirus must be laboratory escape.”

This latest study comes on the heels of a revitalised focus on scientific research by Professor Angus Dalgleish of St George’s Hospital, University of London and Norwegian virologist Birger Sorensen which presents compelling evidence suggesting the virus was manufactured in a laboratory.

As the scientists noted, they were ostracised and ignored until recently when intelligence findings revealed that workers at the Wuhan lab fell sick with COVID-19 symptoms in November 2019.

As the global pandemic unfolded, scores of scientists came forward suggesting the genome sequencing of the virus was unnatural, and should be further investigated. The lab leak theory was effectively shut down, however, when scientists led by Dr Peter Daszak “orchestrated a ‘bullying’ campaign and coerced top scientists into signing off on a letter to The Lancet journal aimed at removing blame for Covid-19 from the Wuhan lab he was funding with US money.”

Daszak, who keeps appearing as the lead figure in investigations of the research he funded with US grant money via his own organisation, reportedly used his influence to get The Lancet to publish the letter, which stated that to even suggest the lab leak theory had any credibility was equal to spreading “fear, rumours, and prejudice.”

The release of Dr Fauci’s emails has also reconfirmed that Fauci was discussing the lab leak scenario with other scientists, and knew full well that it was a distinct possibility, despite making statements to the contrary in public, before any robust scientific research into the matter had been carried out.

Now former head of the Food and Drug Administration, Scott Gottlieb, has revealed that Fauci briefed world health leaders in the spring of 2020 that the lab leak was a possibility.

Appearing on CBS News this past weekend, Gottlieb admitted that Fauci told government health advisors that the virus “looked unusual,” and that scientists he was working with “had suspicions” that it was manipulated.

Former FDA commissioner Scott Gottlieb says he was informed by a senior Trump administration official in spring that Dr. Fauci briefed world health leaders in Europe “that this could have been a potential lab leak…so those discussions were going on.” pic.twitter.com/2OlTg8bMof