A New York parent brought the heat to members of the Carmel Central School District board for ’emotionally abusing’ children by ‘indoctrinating them with communist values.’ 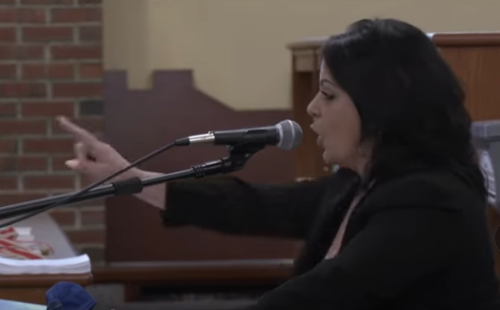 In comments at a school board business meeting in Putnam County, NY on Thursday, parent Tatiyana Ibrahim – whose child is a student, slammed the educators for promoting Critical Race Theory (CRT), Black Lives Matter, LGBTQ and anti-police ideologies both on and off campus.

Ibrahim shut down school board members’ objections several times – in between calling out two teachers for posting their political beliefs online. When board members told her she wasn’t allowed to reference people by name, Ibrahim claimed those teachers called “for the death of a former president,” and that students who don’t support Black Lives Matter should be “canceled out.”

“Why are we not allowed to say names? Why am I not allowed when they purposefully expose themselves on social media, talking about calling for the death of a former president, or saying that any child who doesn’t believe in Black Lives Matter should be canceled out. Is this what my tax dollars are paying for?” she asked.

“You’re emotionally abusing our children and mentally abusing them,” Ibrahim continued. “You’re demoralizing them by teaching them communist values, this is still America, ma’am.”